ALSPAC says... "Social communication impairments had the strongest association with a depression diagnosis at age 18 years" 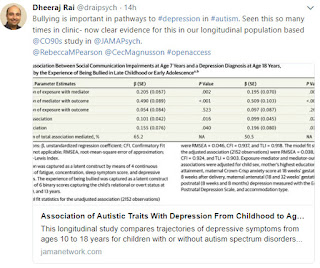 ALSPAC mentioned in the title of this post refers to The Avon Longitudinal Study of Parents and Children, one of the premier research initiatives here in Blighty, that has provided all-manner of interesting and important research associations. With autism in mind, ALSPAC has opined on various different research questions (see here and see here for examples) including the issue of a possible 'real' increase in the numbers of children presenting with autistic traits (see here).

On this particular research occasion, ALSPAC was the source data for the findings reported by Dheeraj Rai and colleagues [1] who set out to "compare trajectories of depressive symptoms from ages 10 to 18 years for children with or without ASD [autism spectrum disorder] and autistic traits, to assess associations between ASD and autistic traits and an International Statistical Classification of Diseases, 10th Revision (ICD-10) depression diagnosis at age 18 years, and to explore the importance of genetic confounding and bullying." I might add that some of this authorship group are making some real research waves when it comes to investigations using population registries with autism in mind (see here).

The starting point this time around was the notion that a diagnosis of autism is in no way protective when it comes to a diagnosis of depression and/or the expression of depressive signs and symptoms. Again, it's a topic that has cropped up before on this blog (see here) and is perhaps one of the longer term associations that have been made down the years. The idea that depression or depressive symptoms *might* be something much more than just 'comorbid' in the context of at least 'some' autism is something else that has been banded around the peer-reviewed research literature before (see here) but the evidence base is not particularly big or strong in this area at the moment.

There were a few different research questions asked by Rai et al, including looking at children "with or without ASD or high scores on autistic trait measures" and any relationship(s) with depression and depressive traits. They report findings for over 6000 children ("maximum sample with complete data") where questionnaire items on bullying were also included ("Relational and overt bullying was assessed as separate yes or no items at ages 8, 10, and 13 years using the modified Bullying and Friendship Interview Schedule") alongside various other potentially confounding variables.

Results: "children with ASD and those with higher scores on all autistic trait measures had more depressive symptoms at age 10 years than the general population, and these remained elevated in an upward trajectory until age 18 years." I don't think there's anything too novel in such findings, aside from the observation that depression / depressive symptoms may start quite early on in childhood. I can remember when I started out in autism research a couple of decades ago hearing about depression being typically linked to the onset of adulthood in the context of autism. This current data suggests otherwise.

Next: "Social communication impairments had the strongest association with a depression diagnosis at age 18 years. Findings were robust to adjustment for a range of confounders, including maternal depression and anxiety and the child’s polygenic risk for autism." This is important. What it suggests is that there may something 'more than just comorbid' about depression or depressive symptoms appearing alongside autism or at least in connection to certain autistic traits. I know some people have already taken exception to this possibility alongside the use of the word 'impairment' by the authors. But much like other research on an important bedfellow to depression - anxiety - one may have to entertain the possibility that there may be some enhanced 'predisposition' to something like depression alongside the presentation of autistic traits (see here and see here) perhaps mediated by factors such as rumination and perseveration for example [2]. This doesn't mean that depression is solely a product of autistic traits; merely that certain traits may potentially form an important vulnerability factor. I'm similarly minded to bring in other work from the ALSPAC initiative [3] (including Rai and colleagues as authors) where related findings were mentioned: "Social communication impairments are an important autistic trait in relation to suicidality." This on the basis that depression and suicidality show an important association.

Also: "We found evidence of a substantial role of bullying in contributing to and explaining a higher risk of depression in individuals with ASD and autistic symptoms." Bullying in the context of autism is another long-standing topic (see here). Bullying covers a lot of ground in terms of behaviour and also source (see here). The authors opine that: "Previous work has shown strong links between the experience of bullying and later depression... although confounding could have a role, the association is considered to be at least partially causal." It's also important to note that social-communication 'issues' were reported to be potentially predictive of being bullied according to the authors. The model that then appears hints that the appearance of depression *might* be linked to "reduced self-esteem or social isolation after the bullying" accepting that causality is not established and also not accounting for other variables: "other relevant characteristics, including comorbidities with neurodevelopmental conditions (eg, attention-deficit/hyperactivity disorder) and classroom placement could be important in this association within or outside the context of bullying." That last point is important in the context that autism rarely exists in some sort of diagnostic vacuum (see here).

There are a few caveats attached to the Rai findings that need to be kept in mind outside of any 'correlation does not necessarily equal causation' sentiments. So: "atypical presentations of depression are common in ASD, and our study has the potential for outcome measurement error because we used scales... that have not been adapted for autism." Indeed. I've previously talked about how bipolar disorder for example, might not follow a typical pattern when present in the context of autism (see here). I daresay that this could also hold for other types/forms of depression too. I'm also minded to reiterate that depression, as well as being a heterogeneous condition, also seemingly has many pathways to it. Some of those pathways will include psychological and social variables such as bullying and perhaps even more extremes of 'trauma'; where a diagnosis of PTSD is for example, no stranger to autism (see here). 'Happiness' and perceived quality of life (see here) are also likely to exert an important effect too.

Other pathways to depression seem to be more biologically defined as per depression in the context of physical ailments (see here) that may have a *link* to some autism (see here) or following the use of seemingly common medicines according to recent news reports (see here). I'll also mention that things like physical activity and exercise *seem* to show an important relationship with depression (see here). This could also be pertinent to the data suggesting that physical activity levels are typically not optimal where and when autism is diagnosed (see here). Other factors (fatigue, sleep, etc) also need to be mentioned in the context of depression. In short, there are lots and lots of potential variables to consider [4].

Outside of the important messages from the Rai findings on how depression is over-represented in relation to autism and how social factors like bullying seem to be linked  to it and thus are subsequently 'modifiable', there is another important point to consider: depression is typically treatable. Minus any medical or clinical advice being given or intended, the first step in managing/treating depression is identifying it. Perhaps the Rai findings might serve as a further call to action for preferential screening in the context of autism...