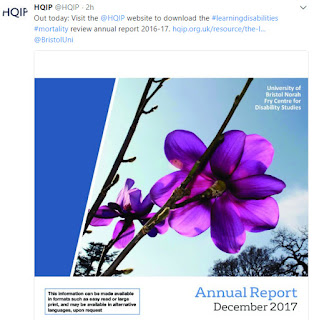 LeDeR mentioned in the title of this post, refers to the Learning Disabilities Mortality Review, an English initiative designed to "make improvements to the lives of people with learning disabilities." Part of that 'make improvements' statement covers the important area of health inequality and some truly shocking early mortality risks that seems to follow a diagnosis of learning (intellectual) disability. To quote: "Today, people with learning disabilities die, on average, 15-20 years sooner than people in the general population, with some of those deaths identified as being potentially amenable to good quality healthcare." Remind me what century we live in again...

I've covered early mortality in the context of learning disability before on this blog (see here and see here) and how various factors seem to 'converge' to place someone diagnosed with a learning disability at some significant disadvantage when it comes to living a healthy life or being faced with an early death. So things like an acknowledgement that various physical conditions seems to be 'over-represented' alongside learning disability and the idea that diagnostic overshadowing is quite prevalent are some key points to consider (see here). Minus any sweeping generalisations, I should also mention that the quality of the care received (or sometimes not received) by some people diagnosed with a learning disability is also sometimes part of the picture too (see here).

The LeDeR report covering 2017 [1] once again paints a pretty grim picture of how we, as a society, treat some of how most vulnerable members. Some media coverage of the publication of the report can be seen here and other bloggers have dissected some of the observations (see here). The report notes from the period 1st July 2016 to 30th November 2017 there were over 1300 deaths reported to the LeDeR programme. Also: "The median age at death of people with learning disabilities (aged four years and over) was 58 years (range 4-97 years). For males it was 59; for females 56." And: "More than a quarter (28%) of deaths were of people aged under 50 years." More than a quarter of deaths were noted in those under 50 years of age. Let that sink in, as it appears that being diagnosed with a learning disability impacts on how long you're likely to live. Perhaps just as important was another observation made: "People with profound or multiple disabilities had a median age at death of 41 years; those with mild or moderate learning disabilities had a median age at death of 63 years." There appears to be a dose-related relationship between mortality and how disabled a person was.

Details on the cause of death also revealed some important patterns. Respiratory illness was mentioned on the death certificate of some 30% of people - the most frequently cited cause - and diseases of the circulatory system in around 15%. In more detail, these categorisations covered specific diagnoses such as pneumonia and sepsis. I should also mention that epilepsy was also mentioned as a cause of death in around 4-6% of cases.

Where next? Well, the report does make some recommendations to try and reduce/eliminate such health inequalities in the context of learning disability. Obviously, not every death recorded could have been avoided, but there are potential ways and means in which care might (should!) be improved to help lessen the risk of early mortality for some. Outside of things like 'strengthening collaboration and information sharing' noted in the report, I was drawn to a few other recommendations including one stating that "all people with learning disabilities with two or more long term conditions (related to either physical or mental health) should have a local, named health care coordinator" and another that: "There should be a national focus on pneumonia and sepsis in people with learning disabilities, to raise awareness about their prevention, identification and early treatment." I can't disagree with such future directions assuming that is, that the money required to set in motion such recommendations, also follows suit.