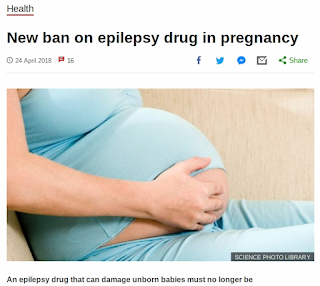 AEDs mentioned in the title of this post refer to antiepileptic drugs, a class of medicines that provide life-enhancing and sometimes life-saving relief from symptoms of various conditions headed under the term epilepsy. As I've mentioned previously on this blog, the management of epilepsy is not something to be taken lightly given what the condition(s) can mean in terms of (life-threatening) risks. AEDs provide both an important management and preventative tool. Don't ever forget that.

The results published by Arron Lacey and colleagues [1] add to a bank of peer-reviewed research observing that whilst various AEDs provide an important service with regards to the management of epilepsy, they are not however without potential risks of their own. Indeed, the risks following consumption of such medicines - or at least certain AEDs - during pregnancy when it comes to offspring outcomes are seemingly becoming more and more evident as ever more [peer-reviewed] science appears... 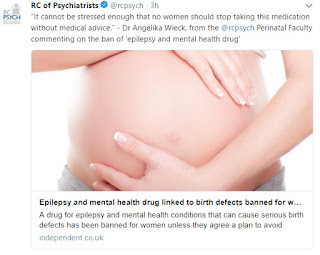 I should at this point mention that no medical or clinical advice is given or intended on this blog. This is even more pertinent when it comes to this topic and what epilepsy means to many, many people. If you want further information about the topic discussed today, please, speak to your prescribing physician and don't make any medication changes without their input and say-so.

OK, Lacey et al started out with the aim of investigating "the effect of AED exposure in utero on the educational attainment of children born to mothers with epilepsy using anonymised, routinely collected healthcare records and the results of a standard national educational assessment." That anonymised database was something called the Secure Anonymous Information Linkage (SAIL) databank, a resource funded by Health and Care Research Wales, thus providing a clue as to the population on which this research was carried out with.

Researchers identified women diagnosed with epilepsy - "a diagnosis of epilepsy if their GP [general practitioner] record contained an epilepsy diagnosis code as well as a record of repeat AED prescriptions" - who had children, and looked also at their child's education attainment at 7 years of age. In case you might not be familiar with measuring educational attainment here in the UK (yes, Wales is a country part of the UK), the particular assessments taken at 7 years of age are called the Key Stage 1 (KS1) SATs. Maths and English made up the core topics alongside science at the study time in question. Educational data of offspring were included in the statistical mix and results reported as a function of maternal epilepsy and corresponding prescription of AEDs.

Results: "We demonstrate through the analysis of linked data in the SAIL databank that mothers being prescribed multiple AEDs and those being prescribed sodium valproate have children with significantly poorer attainment in national tests at the age of 7." The authors once again (see here) specifically zoomed in on a role for valproate when it came to educational outcomes of offspring; where: "there was no difference seen in children exposed to carbamazepine, lamotrigine or mothers who did not take drugs during pregnancy." Importantly also, authors noted that: "We did not find a significant decrease in attainment in children born to mothers with epilepsy who were not prescribed an AED during pregnancy" indicating that maternal epilepsy was probably not a 'cause' of the results obtained. Finally, when cases of smoking during pregnancy - something that also seems to be able to affect offspring developmental and/or cognitive outcomes - were removed from the statistical mix, authors reported that the results did not notably change.

There are some important strengths associated with the study results by Lacey and colleagues. A large cohort, clinical information on the diagnosis of epilepsy and associated prescribed AEDs, and the reliance on "a standardised national assessment as a measure of performance" with "results [that] would closer reflect the learning experience of children at this age compared with an IQ test" all add up to something pretty impressive. The authors note that they did not / were not able to control for other potentially important variables such as parental characteristics that may have impacted on the study results but no investigation is perfect. That analysis based on epilepsy medicated vs. not medicated during pregnancy kinda helps matters but does not mean every potentially important variable was controlled for.

So yet again, valproate use crops up and yet again it seems to be earning its 'black triangle' status. I've lost track of the number of health-related agencies that have provided guidance on valproate use during pregnancy - one of the latest seems to be the European Medicines Agency that recently recommended "new measures to avoid exposure of babies to valproate medicines in the womb." Also going as far as noting that: "Babies exposed are at risk of malformations and developmental problems." There's even a call for it to be "compulsory to enrol all women who take valproate into a national registry" [2].

Then the question remains: how does gestational exposure to valproate affect something like academic achievement and developmental course? Well, we have some clues (see here) but further investigations are of course implied.