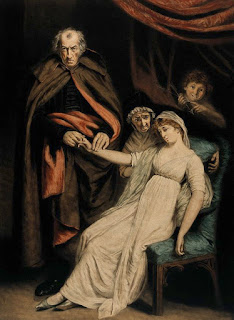 The paper by Blaga Rukova and colleagues [1] (open-access available here) published last year (2014) caught my eye recently and their observations of: "major differences in methylation profiles between male schizophrenia patients in complete remission before and after treatment and healthy controls" as potential evidence that: "antipsychotic drugs may play a role in epigenetic modifications."

The process of methylation, as in DNA methylation where methyl groups are added to specific segments of the genome thus potentially altering the function of certain genes, as one facet of the emerging science of epigenetics, is something that interests me on this blog. Over and above the considerable 'hype' about epigenetics, there are some interesting details emerging from the various epigenetic studies of autism (see here for example) and schizophrenia (see here) that may well turn out to be important assuming appropriate independent scientific replication.

Rukova et al reported results based on an analysis of "20 individual Bulgarian patients with schizophrenia (8 females and 12 males) before and after treatment" whereby whole genome methylation analysis was used to look for differentially methylated regions (DMRs) pre- and post-antipsychotic use as a function of the remission or not of symptoms and gender. The results were not altogether clear insofar as some sort of methylomic biosignature linked to treatment response but researchers did report on several genes that may merit further investigation: "several new genes could be potential targets for new drug discovery: C16orf70, CST3, DDRGK1, FA2H, FLJ30058, MFSD2B, RFX4, UBE2J1 and ZNF311."

"The results from our investigation were shown statistically significant only for the male patient group in complete remission. This points out that epigenetic modification by DNA methylation is more important for male patients compared to females." This is another important detail described by Rukova bearing in mind the small participant group included for study. I'm not an expert on the role of gender/sex on response to antipsychotics but a quick look through the available research literature suggests that gender may be one of several 'non-modifiable' variables linked to therapeutic response [2] when it comes to schizophrenia. The idea that [some] males may benefit more from the epigenetic modifications potentially made by certain antipsychotics than [some] females potentially opens up a whole new world of drug discovery possibilities.

What is perhaps important about the Rukova results outside of their focus on schizophrenia and antipsychotics is the way they looked at how epigenetics / methylation patterns might be implicated in schizophrenia and what it might mean for future research. If one were, for example, to apply a similar method of whole genome methylation analysis to say autism, and how said methylation patterns might change as a function of the myriad of interventions put forward for the condition, one could see how autism research might also benefit from such an approach...

[1] Rukova B. et al. Whole genome methylation analyses of schizophrenia patients before and after treatment. Biotechnol Biotechnol Equip. 2014 May 4;28(3):518-524.