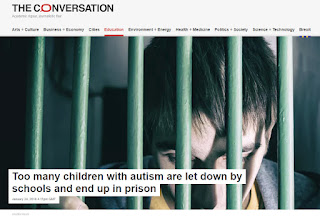 This is a difficult post to write. It's difficult because it covers several topics which are increasingly being *linked* together: autism, the school experience, behavioural problems and aggression, school exclusion and onward 'engaging' with the criminal justice system. Such topics aren't exactly great PR for autism as a diagnosis or label, but do need to be more openly talked about and researched. Useful and productive lives are potentially being wasted (and already vulnerable lives at that).

I was brought to write this post by an opinion piece published in The Conversation titled: "Too many children with autism are let down by schools and end up in prison" [1] by Chrissie Rogers. The author details her research talking to mothers with sons diagnosed with autism or autism spectrum disorder (ASD) who have been and/or are involved with the criminal justice system. Looking at her biography at the University of Bradford, this research looks like its been (partly) published (see here). Having said that, comments left following publication of the Conversation piece, hint that there might be more to come from the author too.

"Mothers in my research talked to me about how their sons were “different”. They were violent to other children and teachers as well as their own families." Reiterating that discussions on this topic don't make for great PR when it comes to autism, such words complement something that has recently been legally enshrined in English law: "aggressive behaviour is not a choice for children with autism." That ruling (see here), based on the case of the unlawful exclusion from school of an autistic boy "after he hit a teaching assistant with a ruler, punched her and pulled her hair" has some potentially far-reaching consequences. It tells us that (a) such behaviour is "akin to a spasmodic reflex" and also that (b) such behaviour should be always be investigated as a 'sign of unmet need'. By saying all that, please don't assume that I condone such behaviour or am trying to pass/move on any blame; I merely suggest that there are often complicated processes behind such actions (see here and see here) which one needs to fully analyse and take into account.

"All the mothers told me they felt something was “not quite right” with their child. And because the support was not forthcoming at school, this negative behaviour escalated and then as these boys got older, they ended up in prison." I think we have to be a little bit careful with some of the things that Rogers discusses here. Yes, it's perfectly sensible to imply that schools 'just excluding pupils' does little to nothing to help efforts to address such 'negative behaviour'; indeed, such actions probably add to a downward spiral, including impacting on the self-esteem of the child concerned. But I'm not altogether convinced that schools that exclude should shoulder such blame alone. Although school exclusion is quite a prominent historical feature of the prison population for example (see here), there are lots of other variables to potentially consider as exerting an important effect on offending behaviour too. And bear also in mind the concept of 'vulnerability' when it comes to autism (see here and see here), and what this can sometimes/often mean in relation to specific types of offending behaviour. What I'm trying to say is that simple correlations or connections are often not entirely correct correlations.

"If more support and intervention in the education system was to occur before the police got involved, then these young people would be less likely to end up incarcerated and at the bottom of a human hierarchy." Again I'm slightly cautious about such sweeping statements being made despite supporting the idea that the educational sector should be the more influential factor over the criminal justice system. 'Support and intervention' is quite a nebulous term and could cover a lot of ground. Although provisions like an EHCP (education, health and care plan) make it (financially) easier for schools and the like to provide additional support, the idea that there is a quantitative correlation between more support and intervention and better outcomes needs to be treated quite cautiously. Indeed, going back to that legal ruling about aggressive behaviour not being a choice for children with autism, the focus really needs to be dual-purpose, examining questions like 'what are the biological and social reason(s) and circumstance(s) for aggression?', and 'what mechanisms can be put in place to minimise such aggressive acts and/or their effects?' I also noted that puberty is mentioned as being part of the behavioural 'mix' in the Rogers article. It strikes me that this is a good place to start when examining the impact that biology in particular can have in relation to the presentation of aggression in the context of autism (see here).

I know lots of people talk about how our one-size-fits-all education system is not necessarily fit for purpose for every child. I wouldn't disagree with such sentiments. Rogers also points out that the drive towards 'inclusive education' whereby education in mainstream schools is becoming the default option for anyone and everyone is also not seemingly serving many children very well. Again, I wouldn't disagree (see here). What I would however say is that focusing in on schools and their actions as 'being the problem' strikes me as being too broad and sweeping a generalisation to make. Indeed it's revealing that Rogers mentions how the mums she interviewed talked about "a lack of support, lack of access to professional help and an overwhelming lack of understanding about their son’s disability, and the impact this had on their lives." Such words speak volumes about how school is but one piece of a larger puzzle that needs a lot more investigation and resources to be directed towards it when it comes to autism, aggression, school exclusion and any subsequent heightened risk of contact with the criminal justice system.

[1] Rogers C. Too many children with autism are let down by schools and end up in prison. The Conversation. 2019. Jan 24.