Autism diagnoses in Northern Ireland: the only way is up 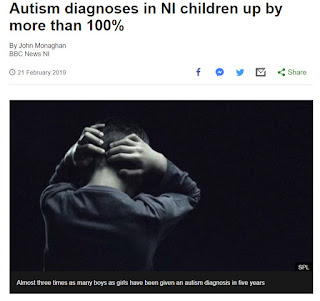 "Autism diagnoses in NI [Northern Ireland] children up by more than 100%" was the headline on the BBC news website recently. It followed a Freedom of Information (FOI) request from the national broadcasting corporation here in Blighty to "all five of Northern Ireland's health and social care trusts... [covering] the period between 2013-14 and 2017-18."

The scale of the issue facing the various health and social care trusts when it comes to the significant 'growth' in both received and 'awaited' autism diagnoses is not to be under-estimated. Indeed, the BBC really needn't have gone down the FOI route because Northern Ireland already collects and quite publicly publishes quite a lot of information about autism in children under their geographical jurisdiction (see here and see here).

The details? Well, if you ever you needed proof that autism is still on the increase among children and young adults, the data provide it: "In total 2,345 children under 18 were diagnosed as autistic last year, compared with 1,047 five years previously." And other details are important too: "In keeping with trends that show males are more likely to be diagnosed, almost three times more boys than girls were found to be autistic in the five years."

What else is there to say? Some old and tired arguments about 'increasing autism awareness' being behind the increase in cases being diagnosed (and awaiting diagnosis and/or assessment) is reported in the BBC piece. About 20 years ago I would have agreed with this but not so much now; we are in an age of autism awareness and have been for several years. Perhaps it's time to start thinking about what factors outside of awareness might also be contributing to the substantial increase? Y'know, entertain the idea that some of the increase may well be a real increase (see here) and start thinking about what factors might be important there?

And with growing numbers of children and young adults being diagnosed with autism, so more current- and future-planning is required to ensure that their health, educational and social needs are met. It sounds great in theory but the reality is that service provisions and resources are already struggling and increasingly scarce. Indeed, a recent article on autism from across the Pond titled "The Coming Care Crisis as Kids With Autism Grow Up" hits the nail right on the head about how 'strained' many systems currently are. And that's without even taking into account what's going to happen 5 or 10 years down the line when more and more autistic children turn into autistic adults. Action is required, like now.