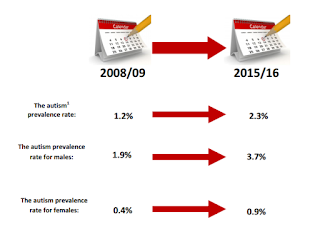 I'm blogging on a Sunday again but for a very good reason: The prevalence of autism (including Asperger’s Syndrome) in school age children in Northern Ireland 2016. The main report is here and includes that quite important graphic accompanying this post.

The press release summarises the important points including the observation that "including Asperger syndrome" the estimated prevalence of autism among school-aged children in Northern Ireland (NI) "has increased by 1.1 percentage points from 1.2% in 2008/09 to 2.3% in 2015/16." Indeed, the estimated autism prevalence rate for boys in 2015-2016 is approaching 4%.

When looking at autism rates across the (school) year groups, we are told that: "Prevalence across all school years was higher during 2015/16 compared with 2008/09." Further: "Looking at Years 1 – 4 (5 – 8 year olds) in 2015/16 there is a steady rise in the prevalence rate of autism. These Year Groups also had the largest percentage increase in the numbers between 2008/09 and 2015/16. This indicates that most identification of autism is occurring when children are aged between 5 and 8 years old."

The question of urban vs. rural rates of autism also showed some interesting trends: "[a] decrease in the
year on year growth of the number of children identified with autism in the rural population
from 13% in 2010/11 to 4% in 2015/16. In comparison the urban autistic population has
increased at an average of 11% each year over the same time period."

What's missing from this data? Well, I'd like to have seen something written about the various comorbidities that seem to be over-represented when a diagnosis of autism is made such as learning disability and the rising star that is attention-deficit hyperactivity disorder (ADHD). The data also says relatively little about how many children are still waiting to be diagnosed in NI as per some media reports on "thousands". I would also suggest that other parts of the UK could learn from NI in terms of data on their [estimated] autism prevalence rates in similar populations.

The bottom line: [estimated] autism prevalence rates are still increasing in many parts of the world for whatever reason. We can argue all day about the factors pertinent to the increase and whether the old 'better awareness' explanation really cuts the mustard these days. The reality however is that more money, support and services need to be pumped into the various educational and health care systems so that potentials can be reached and inequalities are minimised.