Weighing up genetics and environment in autism - reanalysed 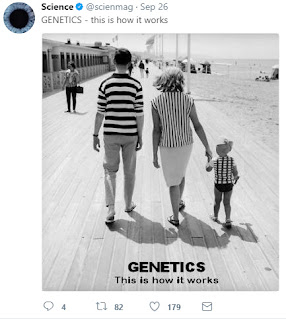 Consider this post a sort of add-on to a previous entry (see here) published on this blog talking about the relative contributions of genetics and environment when it comes to autism. On that previous blogging occasion, the findings reported by Sven Sandin and colleagues [1] were the source material and the observation: "Heritability of ASD [autism spectrum disorder] and autistic disorder were estimated to be approximately 50%." The press release accompanying those results was titled: "Environment as important as genes in autism, study finds."

Now the same data has been though a bit of a re-analysis [2] and a slightly different conclusion and media headline - "Autism is mostly genetic, suggests study" - has been created. The reason for the quite different conclusions reached: "Instead of looking at just one time point when both members of a sibling pair had been diagnosed, they incorporated the fact that not all siblings would be diagnosed at the same time. They may start as being undiagnosed, then one would get diagnosed and, later, another might be determined to have autism" according to another media take on the findings (see here). I can't argue with the logic.

The data - 37 570 twin pairs, 2 642 064 full sibling pairs, 432 281 maternal and 445 531 paternal half sibling pairs - were now analysed in the context that diagnoses of autism/ASD among siblings are, for many reasons, not always uniform in timing. The influence of genetics or more specifically, heritability was subsequently boosted up to 83% (previously suggested to be 50%) and with it, 'nonshared environmental influence' relegated to an estimates 17%.

I've perhaps been a little unfair by using the word 'relegated' in the context of non shared environmental influence in relation to autism. There are plenty of examples out there whereby such influences might impact on autism risk: prenatal valproate exposure, congenital rubella syndrome, various types of encephalitis being linked to autistic symptoms onset (see here and see here for examples), etc and these are not to be downplayed. Environmental factors can be pretty important.

But it's critical to also mention that genetics do seem to play quite a significant role in many instances of autism too. Yes, the idea of an 'autism gene' is already a distant memory replaced by something altogether a lot more complicated, but when taking into account notions such as the broader autism phenotype (BAP) for example, one cannot discount that particularly in multiplex families, heritability is probably [mostly] driven by genetics and science still needs to continue looking at the specific hows-and-whys (see here for one example). I might add that looking at gene expression over just structural genetics is probably going to be useful in these days of epigenetics and the like.

And whilst the research of Sven Sandin is being discussed today, another recent paper where the name has appeared [3] has suggested that "little or no maternal genetics contribution" is the order of things when it comes to heritability and autism...