Oxytocin moving on: ADHD and inattentiveness 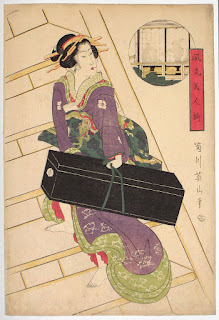 Dare I mention the term 'cuddle hormone' when it comes to oxytocin?

Well, according to a recent news piece in Nature (see here), the 'cuddle hormone' days of oxytocin might well be numbered as science is starting to come to grips with just how complicated a role this hormone might have when it comes to biology and behaviour. Of course we've seen hints of this for quite a while now as autism research in particular comes to grips with the idea that oxytocin may not be the magic 'sociability' bullet that some people thought it might be (see here). That's not to say it might not have it's uses; just not for everyone and not necessarily just exclusively with [parts of] the autism spectrum in mind.

As if to prove a point, today I'm talking about the findings reported by Tsuyoshi Sasaki and colleagues [1] (open-access) and the observation that within a small participant group: "decreased levels of OXT [oxytocin] may play a role in the pathophysiology of patients with ADHD [attention-deficit hyperactivity disorder] and its inherent inattentiveness."

Measuring serum OXT levels in three groups - "drug naive ADHD (n=23), medicated ADHD (n=13), and age- and sex- matched, neurotypical controls (n=22)" - researchers reported that compared with asymptomatic controls, those with a diagnosis of ADHD presented with a significantly lower level as a group. Taking into account the variable of intervention for ADHD (pharmacotherapeutic intervention that is) also seemed to have effects on measured levels of OXT: "serum levels of OXT were significantly higher in medicated ADHD patients than in drug naïve counterparts."

To complete their study researchers also looked at the possibility of any correlation between levels of serum OXT and behavioural measures with ADHD in mind. They reported something of a possible relationship (negative correlation) between severity symptom scores globally on the ADHD-Rating Scale IV Japanese parents' version (ADHD-RS) (a favourite instrument of mine) and those specific to inattention sub-scores as a function of serum OXT. And with that comes the required call for further research in this area on the basis of their small participant size.

The authors appear to be a little incorrect in detailing their study as: "the first report demonstrating decreased serum levels of oxytocin in ADHD patients." Taurines and colleagues [2] had previously reported that: "Patients with ADHD differed from healthy control children by significantly decreased OT [oxytocin] concentrations." Most of the other research interest in OXT and ADHD seems to have been rooted in the idea that oxytocin as a "medical augmentation of labor" does not seemed to be linked to the later onset of offspring ADHD [3].

Back to the Sasaki study, and the authors try to make some sense of why they got the results that they did. First comes the idea that OXT might play a role in "the human limbic system, including the amygdala" complete with evidence of limbic system involvement potentially linked to ADHD and ADHD-type behaviours. Whilst interesting, I personally am a little sceptical about such a simplistic link. That researchers only looked at OXT levels on one day and during childhood tells us little about any previous levels of OXT during birth or infancy and how they may or may not have affected brain architecture. The fact also that no brain imaging was used as part of the current study means few conclusions can be drawn on this hypothesis at this time.

Next up is some discussion about OXT levels being linked to a variety of other conditions, some of which might overlap with ADHD. Of course this leads us back to autism / autism spectrum and the idea that ADHD and autism appearing comorbid is no stranger to clinical research and practice (see here). Just think ESSENCE. I do think that Sasaki et al are 'on the money' when they suggest "using larger sample sizes of ASD [autism spectrum disorder] cohorts" alongside the ADHD slant as the next step in the evolution of this research area. This might tell us a little more about the nature of any OXT overlap and indeed, which combination of autistic and ADHD traits might further guide OXT research. Needless to say that oxytocin is getting a whole lot more complicated and likely to see even further interest under the wide, wide remit of psychiatry [4]...