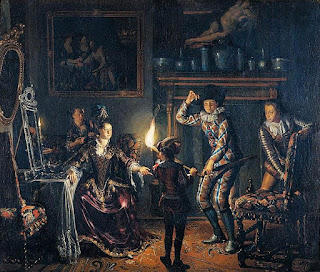 "The present case-report confirms that psychosis may be a manifestation of NCGS [non-coeliac gluten sensitivity], and may also involve children; the diagnosis is difficult with many cases remaining undiagnosed."

Elena Lionetti and colleagues [1] (open-access) provide an interesting read in today's post on how diet and psychiatry might once again be linked. Presenting a case report of a 14-year old girl coming to the attention of clinical services "for psychotic symptoms that were apparently associated with gluten consumption", the authors describe the experiences of an otherwise well child quite quickly developing various psychiatric symptoms. Although initially thought to be autoimmune encephalitis (see here) it became apparent that dietary gluten might be a culprit behind the psychiatric presentation and not necessarily because of the classical gluten-related autoimmune condition called coeliac (celiac) disease (CD) either.

"To our knowledge, this is the first description of a pre-pubertal child presenting with a severe psychotic manifestation that was clearly related to the ingestion of gluten-containing food and showing complete resolution of symptoms after starting treatment with the gluten-free diet." Well actually, it's not; as previous ramblings on this blog come to mind (see here) albeit not with the same serological profile as discussed in the Lionetti paper. Interestingly however is the 'autoimmune' link noted in the paper by Eaton and colleagues [2] potentially overlapping with the Lionetti case report: "The only abnormal parameters were anti-thyroglobulin and thyroperoxidase antibodies (103 IU/mL, and 110 IU/mL; v.n. 0–40 IU/mL)." In light of other 'psychiatric' manifestations correlating with autoimmune issues with thyroid function in mind (see here) I'm beginning to wonder whether there might be a few research studies to do in this area...

Hopefully without plagiarising the Lionetti report, another long quote is coming up: "In our case report, the correlation of psychotic symptoms with gluten ingestion and the following diagnosis of NGCS were well demonstrated; the girl was, indeed, not affected by CD, because she showed neither the typical CD-related autoantibodies (anti-tTG and EMA) nor the signs of intestinal damage at the small intestinal biopsy. Features of an allergic reaction to gluten were lacking as well, as shown by the absence of IgE or T-cell-mediated abnormalities of immune response to wheat proteins. The double-blind gluten challenge, currently considered the gold standard for the diagnosis of NCGS, clearly showed that the elimination and reintroduction of gluten was followed by the disappearance and reappearance of symptoms." I might add that mention of 'leaky gut' in the Lionetti paper might offer a further expansion for the role of intestinal hyperpermeability in psychiatry (see here).

Need I say any more aside from: (i) this being further evidence that Dohan might have been on to something and (ii) more scientifically controlled research is most definitely warranted. Oh, and that the spectrum of possible behavioural and/or psychiatric effects from gluten in some people may be expanding...