A long quote to begin: 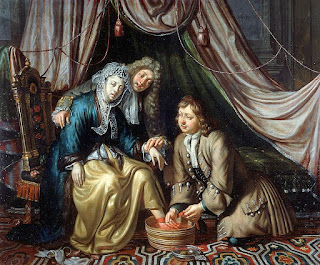 "If the goal of public health efforts is to increase opportunity and optimal outcomes, and to reduce distress, then there may be no better target than the reduction of childhood psychiatric distress—at the clinical and subthreshold levels."

That was the bottom line reported by William Copeland and colleagues [1] (open-access) who set out to test whether psychiatric problems presenting in childhood can "adversely affect adult functioning even if the problems themselves do not persist." The Copeland study also has an accompanying editorial in the publishing journal [2].

Just over 1200 of these research participants were then followed into adulthood - young adulthood - and assessed "for adverse outcomes related to health, the legal system, personal finances, and social functioning." This included responses on the the Young Adult Psychiatric Assessment (YAPA) and accessing official criminal records.

Results: of the original childhood cohort, just over a quarter of children/young adults "met criteria for a common behavioral or emotional disorder at some point in childhood/adolescence (9-16 years of age)." Whilst this might sound a lot, other studies have reached similar conclusions (see here). Added to that, about a third of participants at this stage of development "displayed subthreshold psychiatric problems only."

Drilling down into the details of what diagnosis or subthreshold diagnosis specifically translated into adverse adult outcomes, the authors reported that "childhood depression and conduct disorder were associated with a higher likelihood of having an adverse outcome, and only conduct disorder predicted having 2 or more adverse outcomes." These results held true even when various covariates were taken into account such as low socio-economic status, unstable family structure and maltreatment.

The accompanying editorial does make a case for not jumping to too many conclusions on the basis of the Copeland findings in terms of their meaning. "It is possible that some or all of the causes of psychopathology across the lifespan operate early in life" is one sentiment expressed. Being careful not to make any sweeping generalisations, I would tend to suggest that the evidence does seem to be pointing to early life psychopathology as expressing quite a effect when it comes to later life outcome. Taking for example the idea that a neurodevelopmental disorder might for example, influence the risk of psychosis in later life (see here) is one area where supporting peer-reviewed evidence has been produced. A possible link between the diagnosis of autism (Asperger syndrome) and an elevated risk of bipolar disorder (see here) in adult life is another.

Irrespective of the hows and whys, the data from Copeland adds to the idea that significantly more efforts are perhaps required to 'tackle' childhood psychopathology with the hope of reducing adverse adult outcomes and improving quality of life across the lifespan. Accepting that societal factors might also need some inspection alongside the idea that economics might enter into the equation at some point [3], questions remain about the best way to achieve this aim and how one goes about providing an evidence-based approach to analysing the success or not of any approach to this matter.