"Has Daniel always been autistic?"

"Has Daniel always been autistic?" 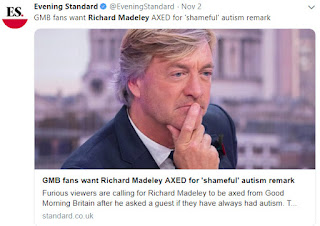 That was the question that led to Twitter uproar and newspaper headlines calling a TV presenter an 'idiot' and "embarrassing" and "ignorant" these past few days. Some have even called for veteran daytime TV presenter Richard Madeley to be sacked, as one of the premier national autism charities here in Blighty authoritatively announced "autism is a lifelong condition, people are born autistic, it’s not something a child grows out of" following the reporting of an interview between Madeley and Daniel Wakeford, one of the stars of the not particularly well titled TV series called The Undateables. Personally, I would have liked to have seen said charity comment on how the term 'undateable' really shouldn't be used in this day and age with any diagnosis/label in mind...

Emotions ran high following the interview, as many parents of children with autism and autistic people voiced their opinions about their own personal experiences of autism. These are all valid opinions. The problem however, is that within the wide - very wide - heterogeneity that is autism, some of the peer-reviewed science on the topic of autism actually supports the line of questioning from Madeley. Some of the peer-reviewed science highlights the sweeping error in saying that autism is (a) lifelong for everyone and (b) that everyone, past, present and future is 'born autistic'.

OK, first things first, autism is a label ripe for sweeping generalisations. We've seen it numerous times as psychological theories for example, have swept through proclaiming that everyone with autism is lacking a theory of mind or empathy or some other related construct. Likewise, I've seen people quite vehemently opine that autism is the product of this or that 'environmental factor' insinuating that simple changes to drink, food or medicines use for example, will 'stop autism'. The reality however is that autism is a label used to describe vast heterogeneity. It's also a label that says nothing about how a person came to be autistic and nothing about the prognosis of their presentation or their life in general.

So what is the cold, objective peer-reviewed scientific evidence to say that autism is not present from birth for everyone? Well, it's multi-fold. It comes from a number of studies that have followed children from early infancy into later childhood to see whether autism *always* manifest from the very earliest days. Take the recent findings from Sally Ozonoff and colleagues [1] (see here for my take) that concluded among late diagnosed children in their cohort: "Seven showed very little evidence of ASD [autism spectrum disorder] in preschool, whereas 7 demonstrated subtle, subthreshold symptomatology." Add it to other independent data [2] that "validate parents' reports that ASD may appear after a period of nonautistic development" (also that "such reports should not be attributed to recall bias") and then throw in the idea that 'regression', as in a regression of previously acquired skills, is perhaps no stranger to many instances of autism (see here). Then to top it all add in other data highlighting specific cases of 'acquired autism' following exposure to particular post-natal infections for example (see here), and the old 'autistic from birth' mantra does not universally hold for everyone diagnosed as being on the autism spectrum. The evidence against the sweeping 'autism is a lifelong condition' statement made following the interview? I'll direct you to some of the numerous occasions that I've talked about such an idea on this blog (see here and see here and see here) based again on the available peer-reviewed science. Cold. Objective. Science.

Minus making any sweeping generalisations of my own, there is scientific evidence out there that 'born autistic' is not something that can be universally applied to everyone on the autism spectrum no matter how many people would like it to be so. In that respect, the question from Richard Madeley was not ignorant nor disrespectful but rather quite sensible and easily discernible from the available science. The fact also that Daniel's mother Carol talked about a 'loss of his language abilities' in her reply to the question (something I'm sure must have been mentioned before the interview took place and was aired) kinda adds to the sound reasoning for Madeley to ask. It also implies that science should keep studying such an important phenomenon.

It seems that when Carol Wakeford responded with the words 'yes, well there's controversy about that' as the first part of her answer to Madeley's question about Daniel, she certainly wasn't wrong...