"Many people with autism could be homeless": conflating a diagnosis of autism with significant proxy-reported autistic traits 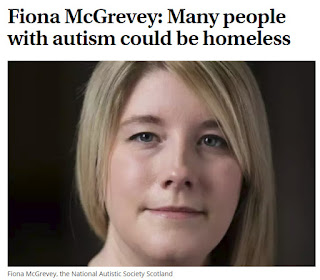 Here I go again. Taking issue with a media headline seemingly designed to grab attention and clicks: "Many people with autism could be homeless." And how said headline doesn't quite match up with the findings of a study upon which it is supposed to be based. It's not the first time this has happened (see here) and I very much doubt that it will be the last...

The study in question was the one published by Alasdair Churchard and colleagues [1] who attempted to fill "a gap in knowledge" concerning anecdotal evidence suggesting that "autistic people experience an elevated risk of homelessness." Researchers report results based on the "entire caseload ( N = 106) of a UK homeless outreach team" where data about autistic signs and symptoms were gathered from second-hand accounts (outreach workers). Authors reported that around 1 in 10 homeless people who underwent such proxy reporting *could* have fulfilled the diagnostic criteria for autism (one homeless person had a previously recorded diagnosis of autism apparently). Around a further 9% received a 'marginal' report insofar as autistic traits reported as being potentially present, but not necessarily to the extent of reaching clinical cut-off points. Researchers also summarised their results for the lay audience too (see here).

I'm pretty sure that you can see some of the 'incongruence' between the 'many people with autism could be homeless' headline and what the study actual did and reported on. I should also mention that although the DSM-5 was the diagnostic criteria relied on during the study, the authors highlight how this was administered via their own 'creation' - "a DSM-5 Autistic Traits in the Homeless Interview, which we call the DATHI." I don't want to poo-poo such an instrument and it's usefulness in the context of autism and homelessness, but I would like to see a lot more work on its reliability and validity in future studies before any big judgements (or even bigger headlines) are made. Even better would be talking to and directly screening homeless people for autism as a next research stage; to help for example, with important clinical decisions such as whether 'symptoms cause clinically significant impairment in social, occupational, or other important areas of current functioning' to them as per the DSM-5 guidance on receipt of an autism diagnosis. Obviously such direct questioning might not be easy. One also needs to consider whether the status of homelessness might itself contribute to such 'significant impairment in social and occupational' functioning? Also throw in the idea that autistic traits are not necessarily just indicative of autism (see here for one example) and you have a recipe for some significant misunderstanding around the risk of homelessness and a diagnosis of autism which could further stigmatise. Sweeping generalisations about autism have already done more than enough damage down the years, often built on fairly flimsy evidence.

I'm not saying that there is no possible connection between autism (or autistic traits) and the status of homelessness. On the contrary, when one looks as the some of the myriad of reasons why a person becomes homeless (see here), there's more than a pinch of overlap with issues faced by those with autism. I will particularly highlight vulnerability variables like unemployment, poverty, poor physical and mental health and a lack of social support as being some of the most obvious commonalities. There are probably others. And where autism is identified in the homeless, one would expect there to be some added incentive to ensure they are well and given the advice and help they want/need to take care of themselves. Bearing in mind that is, that we aren't really in any position to dictate anyone's living arrangements to them...

And there's one final point to consider: various studies for example, have already talked about 'homelessness and the mental health scandal' (see here) where, in some cases, 4 out of 5 homeless people have been identified as having a mental health issue. Symptoms and diagnoses such as schizophrenia/psychotic disorder, mood and anxiety disorders and intellectual disability have all been talked about in the context of homelessness [2] alongside issues like substance abuse. Some of these labels/diagnoses have even been identified as having a direct influence on rough sleeping behaviour by some people (see here). You could well say that many of those behavioural and psychiatric labels/diagnoses have also featured in autism (see here and see here and see here for examples) and that within the context of 'autism rarely appearing in a diagnostic vacuum', so autism might then show a link to homelessness. But I'd be very careful to just singling out autism in this context. Very, very, very careful indeed...