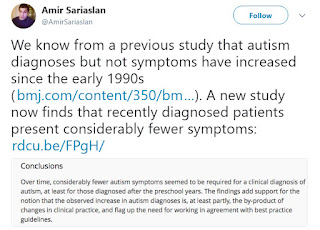 I'm pretty sure that the findings reported by Olof Arvidsson and colleagues [1] are going to be a talking point for some time to come. Examining whether: "A decrease over time in the number of autism symptoms required for a clinical autism diagnosis would partly help explain" the increase in the prevalence of autism "reported to have increased worldwide", the authors relied on data from the parents of several thousand twins alongside other resources to look at this important issue.

There is no doubt that there has been a considerable increase in the numbers of people being diagnosed with autism (see here) stretching across nations (see here). People have previously used the term 'epidemic' to describe the increase but that's not strictly accurate given that autism is not an infectious disease like flu for example. And despite some very forthright assertions about 'knowing the causes' from various quarters, the reason(s) for the increase are likely complex and probably not always the same in different parts of the world (see here for example)...

The Child and Adolescent Twin Study in Sweden (CATSS) and the Swedish National Patient Register (NPR) were the data sources included for study by Arvidsson and colleagues. CATSS is a telephone-based study where parents of all twins born in Sweden are asked to participate. Those who responded to administration of the Autism-Tics, ADHD and other Comorbidities inventory (A-TAC) were included in the present study (N~28,000 between 1992 and 2007).  Alongside, participants diagnosed with autism or with an autism spectrum disorder (ASD) were identified in the NPR (N=430) and whittled down to some 270 children based on being born between 1992 and 2007.

The study aims were three-fold: "(a) detect whether the number of ASD symptoms in clinically diagnosed ASD cases had decreased over time, (b) analyze whether any changes might be associated with age at diagnosis and (c) investigate whether individuals diagnosed with ASD in childhood would show variation in the amount of coexisting non-ASD problems and of dysfunction and suffering over time."

There's lots to take in from this research but I'll start with a quote from the authors: "the observed decrease in autism 'symptom load' in diagnosed individuals does not necessarily correspond to a decrease in the need for interventions and societal support." This was quite evident when authors looked at the data on comorbidity and "dysfunction/suffering scores" (yes, some people with autism do suffer as a result of their symptoms) that remained fairly constant throughout. Indeed, added to this, the authors talk about how there may be a "change in perception of what it is that is disabling" in terms of schools for example, requiring more "cooperation in groups and self-reflecting abilities." Overall symptom severity might be decreasing but the environment *might* be getting tougher in different ways?

But it's difficult to brush these findings under the carpet and how they relate to the question titling this post: Does a diagnosis of autism today mean the same as a diagnosis of autism decades ago? On the basis of these findings, one would have to say perhaps not (in the general quantitative sense). More study is required however including on how 'female autism' *might* influence some of the patterns (see here) discussed by Arvidsson et al, alongside the idea that age and maturation might influence the often quite fluid presentation of autism [2]. I'm also minded to reiterate that 'autism-related dimensions' are not always 'autism-specific dimensions' (see here) and the important studies suggesting that the presentation of autistic traits does not always merit a clinical diagnosis of autism (see here).

And bearing in mind the tweet snapshot picture accompanying this post, the paper by Sebastian Lundström and colleagues [3] is here and well worth a read...