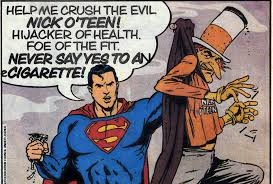 "Another reason why pregnant women shouldn’t smoke: schizophrenia" went one media headline reporting on the findings by Solja Niemelä and colleagues [1] who concluded that their results were the "most definitive evidence to date that smoking during pregnancy is associated with schizophrenia."

Analysing data from nearly 1000 people identified with schizophrenia whose information, and that of their mothers, were held in one of two databases - the Finnish Prenatal Study of Schizophrenia and the Finnish Maternity Cohort - researchers embarked on a case-control study. Maternal cotinine levels - a metabolite of nicotine - were analysed from archive serum samples taken during pregnancy ("early- to mid-gestation") and compared across groups based on offspring who did or did not go on to receive a diagnosis of schizophrenia. Authors concluded that: "A higher maternal cotinine level, measured as a continuous variable, was associated with an increased odds of schizophrenia." The increased 'risk' of offspring schizophrenia to those mothers with the highest cotinine levels (highest nicotine exposure) was somewhere in the region of 38% and "were not accounted for by maternal age, maternal or parental psychiatric disorders, socioeconomic status, and other covariates."

Accepting that correlation is not the same as causation and that one has to be slightly careful when analysing just one biomarker, I was intrigued by these latest findings. A quick trawl of the research literature in this area suggests that this is not the first time that maternal smoking behaviour might have implications for offspring risk of schizophrenia [2]. I don't doubt however, that any relationship is likely to be complicated and potentially influenced by various other factors as we are reminded that elevated levels of maternal cotinine indicative of heavy smoking were also reported in nearly 15% of mothers of control (not schizophrenia) participants in the Niemelä study. I might also add that when it comes to other labels not necessarily a million miles away from schizophrenia, the suggestion of a link with smoking during pregnancy is not strong at all (see here).

Where perhaps the latest findings are so interesting is the idea of a possible relationship between a proxy measure for foetal nicotine exposure and risk of schizophrenia. The emphasis is on 'nicotine exposure' and not necessarily the myriad of other toxins that are present when tobacco combusts (although I'm sure they might exert some kind of effect) thus potentially suggesting that quite a bit more research is indicated on other sources of nicotine exposure during pregnancy such as the use of nicotine replacement skin patches or even e-cigarettes. Indeed, having recently watched the ever-intrepid Dr Michael Mosley discuss the question: 'Are e-cigarettes really a menace?', with the Niemelä findings in mind, one might have to conclude, very possibly if used during pregnancy depending on what level of nicotine they might deliver. Just however, to confuse you further, the use of nicotine - "targeting nicotinic and nicotinic receptor subtypes" [3] - as a potential intervention for [some] schizophrenia has to be mentioned although perhaps not necessarily in the long-term.

Irrespective of the plausibility or generalisability of the Niemelä findings, giving up smoking when pregnant to protect the developing foetus from potential schizophrenia or lots of other things, really is a no-brainer...

[1] Niemelä S. et al. Prenatal Nicotine Exposure and Risk of Schizophrenia Among Offspring in a National Birth Cohort. American Journal of Psychiatry. 2016. May 24.