Is autism underdiagnosed in prisoners? Probably not... 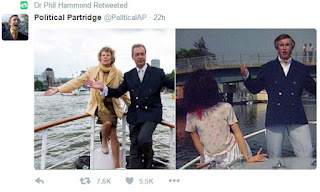 The UK media today is awash with the result of 'that referendum'.

Life however goes on here at Questioning Answers and today the recent opinion piece by Sarah Ashworth [1] talking about autism being 'underdiagnosed' in the prison population provides the starting material for today's post.

Being careful not to generalise nor also 'excusing' the often important reasons why people end up in prison, I'm particularly interested in this area of discussion given what is increasingly being recognised with regards to the levels of attention-deficit hyperactivity disorder (ADHD) in the prison population (see here). So it was that I wanted to talk about the peer-reviewed literature with autism in mind too.

OK, let's start from the beginning and how the currently available data has generally concluded that "people with ASD [autism spectrum disorder] do not seem to be disproportionately over-represented in the CJS [Criminal Justice System]." [2] Indeed, when I've previously covered this topic (see here), on the occasions that people on the autism spectrum have had contact with the CJS, most times this was as a result of spontaneous crimes over pre-meditated ones [3] and detainment sentences were diverted in all cases (at least in the Cheely cohort). What this tells us is that, no, not every prisoner has autism (or ADHD) - not even close - and that a diagnosis of autism can sometimes be seen in legal terms as a mitigating factor [4]; a point recently noted in a "very sad case with a sad background narrative."

But, and it is an important point, the focus on the Ashworth opinion piece on autism being underdiagnosed in the prison population refers to the fact that formal diagnosis before entering the CJS may not be the whole story. Indeed, I will draw your attention to the paper by Louise Robinson and colleagues [5] who started from the point of: "concerns that individuals with autism spectrum disorders (ASDs) are over-represented but not recognised in prison populations" in their attempt to looking at possible screening of prisoners for autism. The results? Well, let's just say that their 'screening tool for ASDs' in prisoners needed more work but on the basis of their findings "rather than routinely screen for ASDs in prison, staff should be encouraged to raise concerns about individuals struggling to cope in prison." Make of that what you will, although prison and probation staff can sometimes be surprisingly good at picking up those in potential need of further referral.

Moving on, or rather going back to the idea that a diagnosis of ADHD might be over-represented among the prison population, are those findings from Ylva Ginsberg and colleagues [6]. They observed that among the longer-term inmates where ADHD was identified (~40%), an ASD might also be comorbid in about a quarter of these cases. This is perhaps not an entirely unexpected finding given what is known about autism and ADHD comorbidity (see here) and *could* be interpreted in the context of autism underdiagnosis in prisoners just reflecting that ADHD is also underdiagnosed. Without moving 'blame' from label to label, there is quite a strong emerging research base suggesting that a heightened risk of going to prison as one possible [7] long-term adverse outcome following a diagnosis of ADHD is worthy of a lot more investigation particularly when it comes to trying to mitigate any enhanced risk (see here).

What can we conclude about the question of 'autism underdiagnosis in prisoners'? On the basis of the research base so far, yes, it can happen, because not every case of autism is 'picked up' during infancy and individual reports of such undiagnosed persons coming into contact with the CJS are still apparent. But I'm not so sure about the extent to which underdiagnosis of autism in prisoners occurs [8] and indeed, whether we would necessarily expect large numbers of  prisoners to present on the autism spectrum. I say this on the basis that people on the autism spectrum are far more likely to be the victims rather than perpetrators of crime and although some facets of autism might show some possible connections to certain types of unwanted behaviour (see here), generally speaking, one would expect more law abiding citizens on the autism spectrum than less.

Oh, and before you pull the old 'empathy' card in relation to offending behaviour on this one, we also need to get away from the view that a universal lack of empathy is somehow characterstic of all autism...

The photo included with this post by the way, will contain some familiar faces to most people here in Blighty particular with the EU referendum in mind. For those who might not know, one chap is a comedian and the other a politician... both have, on occasion, had audiences in stitches...