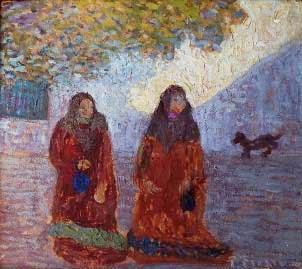 That was the primary conclusion reached in the paper by Krista Partti and colleagues [1] who aimed to "compare the respiratory health of people with psychosis with that of the general population." Their findings, based on data from "a nationally representative sample of 8028 adult Finns" (Finns as in inhabitants of Finland) involved collected data on the frequency of respiratory disease/symptoms as well as measuring lung function via the technique known as spirometry. Tobacco smoking or exposure to smoking, one of the primary causes of respiratory illness in the general population, was "quantified with serum cotinine levels."

"Participants with schizophrenia and other non-affective psychoses had significantly lower lung function values compared with the general population, and the association remained significant for schizophrenia after adjustment for smoking and other potential confounders." Indeed, as per the opening sentence to this post, authors reported some pretty elevated odds ratios (ORs) for various respiratory illnesses related to a diagnosis of schizophrenia compared with asymptomatic controls.

This is not the first time that respiratory diseases have been reported as potentially being more frequently diagnosed in cases of schizophrenia. Schoepf and colleagues [2] reported that in their cohort of those diagnosed with schizophrenia, various physical comorbidity were detected including COPD. As a predictor of "general hospital mortality" both COPD and bronchitis were included in the list of diseases. Other studies have arrived at similar conclusions [3] including data derived from the 'big data' producer that is Taiwan as per the findings from Hsu and colleagues [4].

As per the NHS Choices entry on COPD: "The main cause of COPD is smoking." Tobacco smoking is reported to be more frequently present in cases of schizophrenia [5] albeit with the need for some caution when it comes to making sweeping statements about the overlap [6]. It's therefore not beyond the realms of possibility that smoking habits may very well have a primary role in the association reported by Partti et al particularly in light of their findings on cotinine levels.

That being said, and acknowledging that smoking cessation programmes may be lifesavers for people with schizophrenia as they are for the rest of the population, I'm interested in whether there may be other factors at work when it comes to lung function and schizophrenia. Airway physiology, for example, might be something to consider, particularly in light of other findings when it comes to autism covered previously on this blog (see here). I'm not trying to downplay lifestyle factors [7], just sayin' that we need to cover all the potential bases including looking at whether familial transmission might also be a factor to consider [8].

[3] Hendrie HC. et al. Health outcomes and cost of care among older adults with schizophrenia: a 10-year study using medical records across the continuum of care. Am J Geriatr Psychiatry. 2014 May;22(5):427-36.