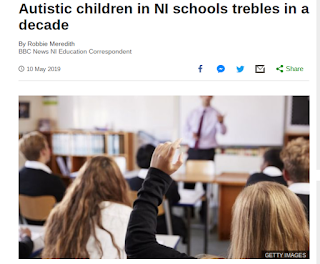 NI refers to Northern Ireland, and the news report relates to the publication of further findings from the Department of Health in NI [1] on the topic of autism prevalence among school-aged children.

A few details are worthy of further mention. First, Northern Ireland seems to be taking a bit of a lead in collecting information about rates of autism in school-aged children (see here). Indeed, many of the 'home countries' making up the United Kingdom (UK) are starting to ask the questions that England, unfortunately, is seemingly not yet asking (see here).

Second, we are told that: "The increase in prevalence of children with autism can be attributed to an annual average increase in the number of children identified with autism of 12% between 2009/10 and 2018/19, against a background of a relatively static school population." This means that the rates of autism in school-aged children are not simply increasing because the school population as a whole is increasing. Indeed, with other not-so-long-ago chatter about long waiting lists for assessment in places like Northern Ireland (see here), one could argue that the current figures are an under-estimate.

Third, with regards to the sex ratio (boys:girls), the 2018/2019 figures suggest that "5.1% of males were identified with autism compared to 1.5% of females." The same figures a decade ago (2008/2009) were 1.9% and 0.4% respectively. I don't however necessarily agree with the: "Autism could therefore be considered to be an extreme of the normal male profile" sentiments expressed by the author to account for this difference but...

Fourth, the rate of the increase across the decade (2008/2009 compared with 2018/2019) was present in every school year. The author focuses in on the fact that nearly 4% of those in Year 6 (the end of primary school) were "identified with autism". He also mentions that most identification of autism in school is occurring when children are aged between 5 and 10 years old. Primary school, it seems, is an important time for the identification of autism.

Fifth: something approaching grading a child for autism 'severity' is also discussed. I know 'severity' is still a contentious issue (someone actually suggested 'severe autism' should be replaced by 'profound autism' which sounds rather sensible). Special educational need (SEN) assessment is a process via which a child's needs are graded. More details about this process applied to Northern Ireland can be found here. SEN stage 4 and SEN stage 5 indicate that a child requires support from school but also that "the education authority shares responsibility with the school." Nearly two-thirds of children identified with autism were at SEN stage 5. This was however down from previous years with the main 'growth' being among those who were gauged at SEN stage 2 and stage 3. The authors caution that such figures are only a snapshot (children can move up and down the SEN stages for example).

Whichever way you cut it, the recent figures out of Northern Ireland show the increasing trend for autism in school-aged children (see here). We can add such figures to those which have recently come out of the United States (see here and see here), Canada (see here) and various other parts of the world. We can quibble about the old 'better awareness' arguments and even diagnostic switching as being primary causes of the increase. I personally do not believe that such explanations even come close to the final reasons for the increase in cases that have been noted and continue to be seen (see here). What I do know is that further finance and resources are required to meet the often complex needs of these children and young adults to allow them to reach their potential.

And minus any emotive language (i.e. tsunami), let's remember that children turn to adults, and many of these children will require on-going help and support into their later years. The question is: are we prepared?