Chronic fatigue syndrome and the detrimental application of the 'biopsychosocial model' 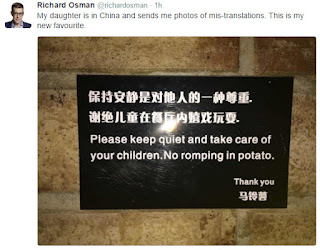 'The times they are a changin'' said a Nobel prize winner and that's also a sentiment that seems true when it comes to chronic fatigue syndrome / myalgic encephalomyeltis (CFS/ME) too (see here for example).

Anyone who has followed the tos-and-fros of the PACE trial - the one that suggested that CBT (cognitive behavioural therapy) and GET (graded exercise therapy) might provide some significant relief of symptoms associated with CFS/ME - will probably have heard the quite open claims being made that "the study was bad science." Scientific dirty laundry continues to be aired in public as a result of the focus on the wrongs and rights of PACE and with it, precious money that might well have been used for CFS/ME science has instead seemingly been used in legal disputes.

Outside of the methodological points potentially associated with the PACE trial/results, at the heart of the issue on whether CBT for example, might influence the progression of CFS/ME is the continued idea in some quarters that ME/CFS is part of a spectrum of conditions primarily centred in the domain of the biopsychosocial (BPS) model. Here, the suggestion is that a biological agent or agents act to trigger the condition but thereafter psychological and sociological factors play a major part in 'maintaining' the condition. For many people who suffer (yes, suffer) with ME/CFS the application of the BPS model to their symptoms has been likened to charges of malingering and subsequently many patients feel let down by medicine and indeed, that their symptoms have been trivialised.

The paper by Keith Geraghty & Aneez Esmail [1] puts some scientific flesh on to the idea that continued use of the BPS model applied to CFS/ME might be detrimental to many patients and particularly their interactions with healthcare providers. Including reference to the quite extensive literature suggesting that all-manner of biological factors may be at work on the various experiences of CFS/ME (see here for example), the authors question "whether or not the BPS model generates ‘harms’ for CFS patients." The conclusion: yes, applying the logic of the BPS model during healthcare consultation is probably not doing much for quite a few patients with ME/CFS who are often in real distress and don't really want to be told it's 'all psychological' and treated as such.

This is an important piece of work. Irrespective of your personal viewpoint of what ME/CFS is (and isn't) it tells us that healthcare interactions are important to people diagnosed with the condition and that "an over-emphasis on the 'psycho' (and only then with regard to alleged causation, rather than impact), at the expense of 'bio' and 'social' aspects of their impairments" has done little to either treat or manage or improve symptoms or quality of life for many people. It also tells us to respect the concept that CFS/ME is a heterogeneous condition and perhaps offer some viable alternatives to the BPS model. Not least is the idea that screening for conditions known to influence fatigue (see here) might be a good starting point and then taking things from there.

I do however think it is important that we don't minimise the psychological effects that ME/CFS can have on a person. Sometimes being bed-bound with only limited contact with the 'outside world' trapped in a spiral of fatigue and rest, fatigue and rest is unlikely to do anyone any good. Indeed, when researchers talk about depression and other psychiatric features being potentially over-represented in cases of CFS/ME, I'm not surprised given how severe fatigue and other symptoms can sometimes be. A good physician should be screening for such accompanying issues and offering the appropriate treatment for them, mindful that these are not necessarily a core part of CFS/ME [2].

I get the impression that the BPS model (in its current form [3]) is coming to the end of its reign when applied to a label like CFS/ME on the basis of more research resources being pumped into looking at the biology/biological course of the condition and less emphasis on the psychological 'treatment' of the condition (see here). This perhaps follows a more general trend where psychogenic explanations for physical illness are starting to receive some critical commentary [4] including critically looking at the idea that "psychogenic illnesses are believed to be more responsive to psychological interventions than comparable "organic" illnesses". This is of course, little consolation for those patients with ME/CFS who've had to face the BPS model even in light of contrary indication [5] and perhaps not had the best experience of it. Indeed, I wonder if there will come a point where a formal apology will be issued about the way science and medicine has treated many people with ME/CFS and the sometimes needless suffering that the BPS model in particular, has had on many aspects including the doctor-patient relationship.

[5] Twisk FN. & Maes M. A review on cognitive behavorial therapy (CBT) and graded exercise therapy (GET) in myalgic encephalomyelitis (ME) / chronic fatigue syndrome (CFS): CBT/GET is not only ineffective and not evidence-based, but also potentially harmful for many patients with ME/CFS. Neuro Endocrinol Lett. 2009;30(3):284-99.

Geraghty KJ, & Esmail A (2016). Chronic fatigue syndrome: is the biopsychosocial model responsible for patient dissatisfaction and harm? The British journal of general practice : the journal of the Royal College of General Practitioners, 66 (649), 437-8 PMID: 27481982
Posted by Paul Whiteley at 09:32