"Gastrin-releasing peptide was safe and well tolerated by most subjects and may be effective for core symptoms of autism."

So said the results of the study - open trial - by Michele Michelin Becker and colleagues [1] continuing a research theme from this author [2] on the potential need for further scientific scrutiny when it comes to the use of gastrin-releasing peptides (GRP) and autism. Emphasising again that results were based on the use of an open trial (everyone knew what was being taken) alongside the small participant group included for study (N=10), researchers suggested that there may be more to see in this area as per the idea that 6 of 10 of the participants "responded to GRP" based on scores on a suite of autism-related assessment schedules. I might add that authors also importantly noted 'adverse reactions' in 3 of the 10 participants so perhaps slightly reducing the impact of that 'safe and well tolerated' sentence above.

For those with long autism research memories, mention of the word 'gastrin', as in the idea that GRP stimulates the release of gastrin in the stomach, might take you back to another gut hormone with a place in autism research history: secretin. Gastrin and secretin (and cholecystokinin (CCK)) show some important relationships with one another, but under typical circumstances secretin normally inhibits the release of gastrin. Just to add to the complexity here, older research had also suggested that GRP (and its homolog bombesin) might also "elicit secretin secretion" [3] under certain circumstances. It's all rather complicated as gut hormone chemistry tends to be.

I note that over the course of their research interest in this area, Becker et al have tended to focus on the idea that their intravenous (IV) application of GRP is probably working on the 'first brain' not the second one as per their discussions about GRP being "released by glutamatergic neurons and acts as a neurotransmitter that regulates neuronal excitability." I might add that other research has talked about GRP in the context of neurogenesis too [4]. Unfortunately as the research currently stands, we don't know very much which biological parameters are being affected by administration of GRP in cases of autism so we can't say too much. There is some suggestion that "neonatal blockade of GRPr [gastrin-releasing peptide receptor]" might have behavioural implications in rats pertinent to the "expression of autism-relevant phenotypes" [5] but again, very little on GRP and gastrin itself in people with autism.

I'm hoping that lessons have been learned when it comes to the potential future investigation of GRP and autism from the secretin story and any prejudice is minimised by mere mention of gut hormones potentially being implicated in some autism. Accepting that case reports are normally the starting point for quite a lot of science, I couldn't help but notice that the 3 case reports paper by Becker et al [2] on the use of GRP in cases of autism was not a million miles away from the 3 case reports paper by Horvath et al [6] on secretin and autism.... 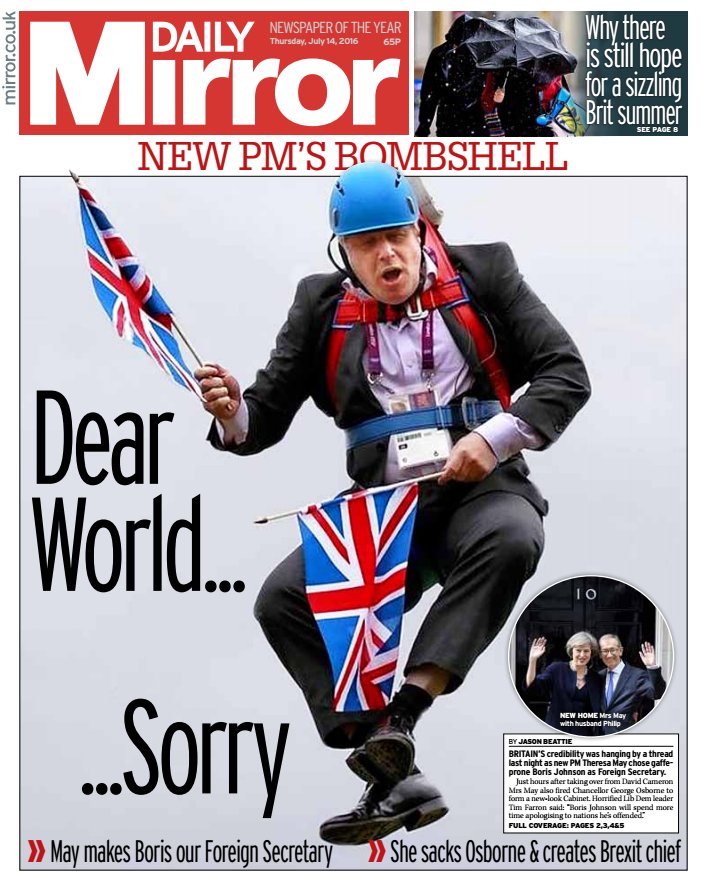 To close, I really hope the picture shown here is not a sign of things to come but just in case, on behalf of the UK, we're sorry...

[1] Becker MM. et al. Improvement in Symptoms of Autism Spectrum Disorder in Children With the Use of Gastrin-Releasing Peptide: An Open Trial. Clin Neuropharmacol. 2016 Jun 21.