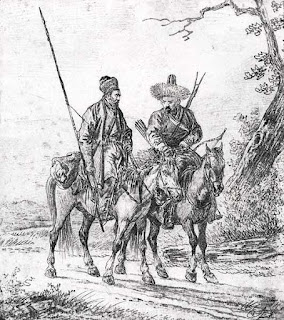 For anyone that has followed this blog down the years you'll probably have noticed that I'm quite a big fan of the inclusion of the science of metabolomics on to the autism research menu (see here for example).

Looking at the myriad of chemical footprints left behind by an almost incomprehensible number of cellular processes, metabolomics offers some real promise to autism in terms of teasing apart phenotypes and as a valuable partner to other -omics sciences in ascertaining the relevance or not of specific biological pathways. All of this set within the context of the plural autisms and the important role of comorbidity (see here).

It is therefore with metabolomics again in mind that I bring to your attention the paper by Binta Dieme and colleagues [1] who weren't joking when they talk about a "multiplatform analytical methodology" with autism in mind. That multiplatform approach included "1H- and 1 H-13C-NMR-based approaches and LC-HRMS-based approaches (ESI+ and ESI- on a HILIC and C18 chromatography column)." If all that sounds like gibberish, the watchwords are NMR - Nuclear magnetic resonance spectroscopy - and LC-HRMS - Liquid chromatography–high resolution mass spectrometry - two of the gold-standard analytical techniques for detecting and identifying compounds of interest in this realm of biology. Some of the other details such as HILIC columns are all to do with how one goes about separating out the individual components of a complicated biological medium like urine as well as some further details about what the authors did to detect them. I might add that this authorship group have some previous form in this area of the autism research landscape (see here).

Based on the analysis of urine samples initially from 22 children with autism and 24 not-autism controls (a training group), researchers talked about the results they obtained from the various metabolomic approaches employed including processing of results by OPLS-DA (orthogonal partial least squares discriminant analysis). I don't want to bore you with the ins-and-outs of what OPLS-DA means (yeah, as if I know!) but suffice to say its all about how one classifies the multitude of data one generates via such analytical methods. This data and analyses were then used to generate a set of compounds (pattern of compounds) potentially predictive of whether or not it could classify a urine sample from someone with autism from a urine sample from someone without autism. Samples from a separate group of participants - "8 autistic children and 8 controls" - were used to 'test' the predictions generated. The authors report that the OPLS-DA model generated "showed an enhanced performance... compared to each analytical modality model, as well as a better predictive capacity (AUC=0.91, p-value 0.006)." AUC by the way, refers to area under the curve and is a term associated with a ROC (receiver operating characteristic). In this respect, the Dieme paper seemed to do pretty well at classifying samples according to autism or not-autism status bearing in mind the relatively small participant group numbers.

Just in case you're not confused enough, there are a few other details about the Dieme paper and findings that are worthy of comment. So: "Metabolites that are most significantly different between autistic and control children (p<0.05) are indoxyl sulfate, N-〈-Acetyl-L-arginine, methyl guanidine and phenylacetylglutamine." Indoxyl sulfate is a particularly interesting compound for quite a few reasons. Not only is the source material for this compound one of the those oh-so-interesting aromatic amino acids, tryptophan (y'know serotonin, melatonin and all that jazz) but the compound itself is described as a uremic toxin [2]. Without wishing to make connections where none may exist, uremic compounds in relation to autism have been discussed before on this blog as per the Elaine Hsiao findings on bacteria and leaky gut in a mouse model of autism (see here) and some chatter about p-cresol and autism (see here and see here). If there is an overlapping factor potentially uniting these findings, it would have to be a possible role for those trillions of wee beasties that call our gut home - the gut microbiome. I might also briefly mention the arginine finding too in relation to a related tryptophan observation for some autism... BH4 (see here).

As I mentioned at the start of this post I am a fan of this area of research area and its potential for furthering knowledge about autism. Larger datasets and perhaps a focus outside of just zooming in on the label of autism are perhaps elements that are needed to aid investigations in this area, alongside a more general combinatorial -omic initiative with a systems biology slant (see here).

Music and I've played this before but here it is again... Weapon Of Choice by Fatboy Slim (a favourite video of my brood).