The yet newer CDC estimated autism prevalence rate: 1 in 59 8-years olds with autism in 2014 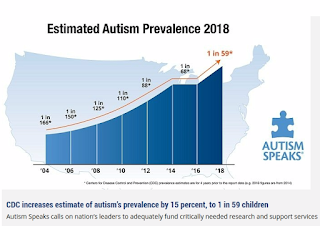 The report detailing the latest autism prevalence estimates from the US CDC has at last been published [1] coinciding with some other information on the findings. These figures were expected, given the two years that have flown past since the last report put the estimated figure at a stabilised 1 in 68 8-year olds being diagnosed with an autism spectrum disorder (ASD) in 2012 (see here) similar to the report before that which covered the year 2010 (see here).

The latest estimate by Jon Baio and colleagues covering the period 2014 is: 1 in 59 otherwise recorded as 16.8 per 1,000 (1.7%) 8-year-olds diagnosed with an autism spectrum disorder (ASD). Media reporting of the latest figures focuses on the headline finding of that increase in the estimated rate (see here) alongside the 'we don't know why' sentiments voiced by some important authority figures (see here).

So, what other details do the statistics hold and what do they mean?

Well, first and foremost the 'stabilising' of figures noted two years ago at 1 in 68 did not seemingly tell the whole story. I know quite a few people made the most of those non-changing estimates to say that 'autism awareness' and 'changes to diagnostic criteria' and 'diagnostic substitution' were the drivers of the increase and the stabilisation was solely reflective of those factors taking their course. Well, I guess not. Indeed, the restarting of the upward trend kinda suggests that there's probably a lot more going on. It also adds to increasing evidence of a possible 'real' increase in autism (see here). But stand by for the 'it can't be a real increase' sentiments to fly in thick and fast...

Second, as mentioned in the last report from the CDC, we are now presented with not one, but two diagnostic systems to characterise autism or ASD, as the DSM-5 enters service. DSM-5, if you'll remember, is the new classification system that is slowly starting to replace the older DSM-IV criteria. It's also the schedule that *seemed* to be a little more 'selective' in who did and did not qualify for a diagnosis of autism according to other external findings (see here). Did it exert an effect on the most recent autism prevalence estimates? Well, yes it did, as authors noted that: "ASD prevalence was approximately 4% higher based on the historical DSM-IV-TR case definition compared with the new DSM-5 case definition." Although the overall effect was probably not a great one, the more selective case definition provided by DSM-5 in the direction of potentially reducing numbers, contrasts with the upward trend reported. It should also be noted that authors mention how there was "approximately 86% overlap between the two case definitions." But... no mention of the other categorisation called Social Communication Disorder (SCD) (see here) was however included in the latest figures. 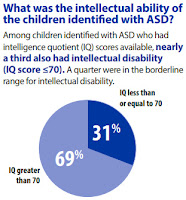 Other details are also mentioned in the new report that are worthwhile noting. Almost a third of the children with autism identified in the latest data, who had intellectual functioning data available, were reported to present with an intellectual or learning disability. This tallies with quite a lot of other independent data on the overlap of learning disability with autism. The 4:1 male:female ratio of autism also seemed to hold true in the latest figures. Also: "While a higher percentage of white children were identified with autism compared to black children, and even more so compared to Hispanic children, these disparities were smaller when compared with estimates from previous years." Autism practice it seems, is starting to reach some traditionally under-served populations, that probably contributed in part to the increased estimate noted. I stress the words 'in part' in that last sentence, just in case more sweeping generalisations are put out there to explain away any 'real' increase in the estimated numbers just to better detection of autism in non-white groups.

So, there you have it. An approximate 15% increase in autism estimates in 8-year olds compared with previous figures. As one news report put it: "a 150% increase since 2000." The authors of this most recent CDC report conclude by saying: "ASD is an urgent public health concern that could benefit from enhanced strategies to help identify ASD earlier; to determine possible risk factors; and to address the growing behavioral, educational, residential and occupational needs of this population." I really can't disagree with any of those sentiments.