Hyperhomocysteinemia as a significant risk factor for autism? 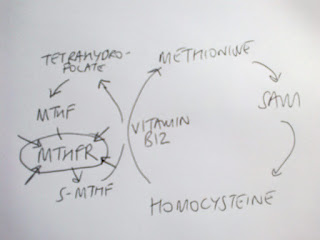 The findings reported by Naushad Shaik Mohammad and colleagues [1] provide some blogging fodder today and the suggestion of a link between some of the genetics of the folate pathway and the finding of elevated levels of homocysteine with [some] autism in mind.

OK, from the start, the genetics of folate metabolism mentioned in the context of autism typically means reference to the quite well replicated finding of issues with the gene methylenetetrahydrofolate reductase (MTHFR) (see here for some background). This gene (product) serves an important purpose in relation to the conversion of 5,10-methylenetetrahydrofolate to 5-methyltetrahydrofolate; the latter helping to convert the amino acid homocysteine to methionine. Outside of the importance of methionine to the process of DNA methylation (yep, some of that epigenetics stuff that you keep hearing about), there is quite a body of literature emerging to suggest that elevated levels of homocysteine might also have some important health effects.

For quite a few years now, a specific genetic issue with MTHFR - MTHFR C677T - has been reported in quite a few people on the autism spectrum (see here). This allied to other independent research suggesting that the downstream effects of issues with MTHFR linked to elevations in levels of homocysteine may not also be an uncommon finding (see here). Shaik Mohammad et al therefore set about looking at the relationship between genetic issues with MTHFR and hyperhomocysteinemia in the context of autism.

They did this by use of an "artificial neural network (ANN) model" where data initially from "138 autistic and 138 nonautistic children" on various genetic issues linked to folate metabolism (including MTHFR) were used as potential "predictors of autism risk." We are also told that: "Meta-analyses were carried out on 1361 ASD children and 6591 nonautistic children to explore the association of MTHFR C677T and homocysteine with the risk for ASD [autism spectrum disorder]."

Results: well, the model wasn't exactly brilliant at predicting the risk of autism (63.8% accuracy). The authors call this a 'moderate' finding but I'd probably suggest that their results are yet another very good example of how heterogeneous the autism spectrum actually is. The idea of not using the term 'autism' as a research starting point in this context (see here) also receives support. Perhaps of greater importance were their findings linked to homocysteine and autism and how: "Hyperhomocysteinemia was observed in autistic children" to a greater extent that controls. They did also confirm that the MTHFR C677T genetic polymorphism was linked to 'inflating homocysteine levels' alongside another genetic issue called MTRR A66G (methionine synthase reductase). This is not an unusual finding in the context of what is already known about MTRR and homocysteine. The MTRR bit potentially linked to autism is however, something that this research group have previously suggested to 'reduce the risk' of autism [2].

In terms of what these results mean in the context of autism, there are a few possibilities. First, screening. Knowing what we now seem to know about MTHFR and homocysteine in relation to quite a lot of people with autism, I would have thought it would be good practice to screen genetics/biochemistry. Minus any scaremongering or sweeping generalisations, the observation that hyperhomocysteinemia 'may' have links to cardiovascular disease and other adverse states for example, also perhaps implies screening save any further charges of health inequality when it comes to the label of autism. Next management. Far from being a 'nothing can be done about it' state, there is some good evidence that small adjustments to nutrition can potentially have positive effects on some of these parameters. With no medical or clinical advice given or intended, high levels of homocysteine seem in some cases, to be reactive to certain vitamin supplementation. The focus on vitamin B12 could also be set in the context of other recent studies of this vitamin (and its vitamers) with autism in mind (see here) (but I am careful not to link the two parameters just yet). And just recently there is news that there is a new way of assaying for vitamin B12 on the horizon which could also be useful. Finally, more research is indicated. As per my discussions not so long ago about another potentially important link to folate metabolism and autism (see here), there does appear to be quite a bit more to see when it comes to the folate cycle intersecting with homocysteine metabolism (and it's downstream effects). Yes, we can talk about whether folate is 'protective' or not when it comes to 'risk' of autism (see here and see here) but what this latest work suggests is that this area is complicated and potentially includes many genetic/epigenetic/biochemical variables that need to be taken into account.