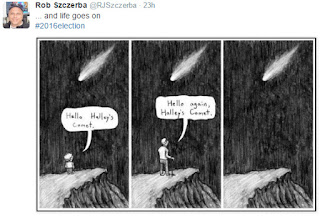 Consider this short blog post an extension of some previous discussions (see here and see here) on a rather peculiar 'association' between urinary tract infections (UTIs) and psychosis. UTIs basically refer to an infection in any part of the urinary system (kidneys, bladder, etc) typically treated with antibiotics. Psychosis is a state that causes a person to perceive or interpret things around them in an atypical way, usually accompanied by delusions or hallucinations. For a while now research has been connecting these two conditions.

The paper by Chelsea Carson and colleagues [1] further adds to the peer-reviewed literature in this area with the observation of: "an association between UTIs and children and adolescents with acute non-affective psychosis." Based on a "retrospective chart review of 227 subjects ages 10–18 who were hospitalized between 2005 and 2014 for an acute episode of DSM-IV non-affective psychosis" compared with those presenting with depression with and without psychotic features, researchers noted that a UTI was not an uncommon diagnosis (20%). Bearing in mind the lack of any asymptomatic control group, authors concluded that screening for [comorbid] UTI in those presenting with acute psychosis might be warranted.

I can't disagree with these findings and conclusions. Combined with other work [2] looking at "an association between an increased prevalence of UTI and acute psychotic relapse" in those diagnosed with schizophrenia, the idea that infection or immunological response to infection might have behavioural as well as physiological outcomes gathers strength from such findings. We still don't know all the hows-and-whys of such an association outside of the idea that inflammatory mechanisms may be at work (see here) but further investigations are most definitely implied.