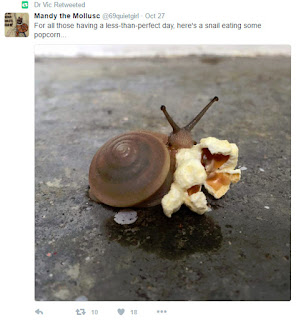 It's been quite a week hasn't it? Indeed for quite a few people it's been a stressful few days so perhaps timely that I'm talking about the 'attenuation of stress' in today's post.

Despite the relatively small sample size included in the paper by by AP Allen and colleagues [1] there is something rather tantalising about their results suggesting that in healthy volunteers "consumption of B. longum [Bifidobacterium longum 1714] 1714 is associated with reduced stress and improved memory."

Tantalising because as well as further directing research attention towards the important relationship that is the gut-brain axis (see here for another example) the findings provide initial support for the concept of "psychobiotics—live microorganisms with a potential mental health benefit" set within a human (not mouse) context.

The Allen paper (who incidentally is on Twitter) is open-access and has previously provided signs that it was to be published (see here). Here are a few choice details:

Take 22 (male) volunteers aged between 18 and 40 years of age who fitted various inclusion/exclusion criteria including no "self-report habitually taking any probiotic products" and ask them to take B. longum 1714 for 4 weeks after giving them a placebo preparation containing just maltodextrin and magnesium stearate and no probiotic for 4 weeks. Deliver various physical, psychometric and self-report questionnaires/tests at various intervals covering things like the "Socially evaluated cold pressor procedure" (SECPT) and other measures and see how things pan out according to placebo/psychobiotic use and after "a 2-week post-probiotic follow-up."

Results: well, as per the opening paragraph of this post, there did seem to be some effects to be had potentially associated with B. longum administration. So, when it came to that 'put your hand in cold water' test (SECPT), participants as a group lasted slightly longer in the cold water than on previous testing occasions. When researchers looked at salivary cortisol levels (a measure of psychological stress) following this acute stress test, they observed some potentially important differences between the initial (baseline) test, the period covering placebo use and the period covering the psychobiotic use. This accompanied some differences in reported state anxiety. Such acute stress findings were also complemented by some subtle but potentially important differences in self-reported daily stress levels (lower) following the period of psychobiotic use (something that "returned to a higher level during the 2-week follow-up period"). The authors also report on some findings associated with testing cognition across the various phases of the study but I'm gonna stay focused on the stress part of things for now before anyone moves towards describing B. longum 1714 as some sort of nootropic of choice just yet.

Of course there is still much to do in this area before anyone gets too carried away with things (how about a few more blinded RCTs pitting placebo against psychobiotic?) but the results are interesting. You could argue that there may have been some influence of practice effects associated with some of the results given the short timescales but I'm gonna take the findings at face-value. More so when when set in the context of other microbial preparations also potentially dealing with certain types of stress under experimental conditions (see here for example).

Mode of action? Well, the authors mention the 'vagus nerve' as potentially being important given the suggestion of a connection between the trillions of wee beasties that populate our gut (the gut microbiota) and brain function(s). The specifics however are yet to be decided upon; and it is also worth noting that as part of the probiotic formulation called VSL#3, B. longum 1714 might have some important 'bowel' effects as per other findings (see here) onwards to behaviour(s) and labels (see here). I'm also intrigued by the finding that post-probiotic there was a suggestion of a waning of some of the previously reported effects implying that far from probiotics being accepted and 'assimilated' into our collected gut microbiota, there may be mechanisms at work tied to going back to the status quo.

"Further studies are warranted to evaluate the benefits of this putative psychobiotic in relevant stress-related conditions and to unravel the mechanisms underlying such effects." Wise words before anyone makes a run on B. longum 1714 or any related preparations but this is an interesting piece of research. Given also the so-far relatively good safety profile of various probiotics, there is an important argument for experimentally testing such stress relief and/or cognition-aiding properties under a wide range of contexts.

To close, we lost another one in 2016. There must be a helluva party going on upstairs...