"... and now believe their pet has canine autism" 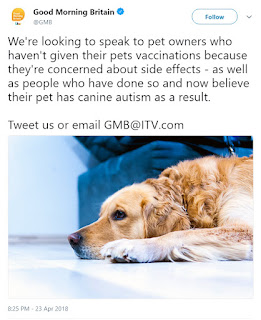 A recent tweet from the account of one of the most popular TV breakfast shows here in Blighty made some waves (international waves no less) for a couple of reasons. Leaving aside the insinuation that vaccination *might* correlate with certain behavioural changes in domestic pets, the idea that autism might not be something exclusive to humans was also implied from said tweet.

Needless to say that quite a few people took exception to the idea of 'canine autism'; even the British Veterinary Association (BVA) insisted that "there is currently no scientific evidence to suggest autism in dogs." But is that actually scientifically accurate? And more widely, is it possible for a non-human to have autism or present with significant autistic features?

Before progressing through the evidence around this question, I think it's worthwhile getting a few things straight. First, I appreciate that whilst autism is a label or diagnosis denoting a set of behavioural characteristics that 'significantly impact on day-to-day life' according to current diagnostic schedules, it's also a label of identity for some people. One therefore needs to be sensitive to the effect that discussions about animals also potentially 'having that label' would have to those who associate with an autistic identity. Second, there is a long, very long, history in peer-reviewed research circles, where animals have been used to model aspects of autism. Take for example, the increasingly important research emerging on a role for prenatal valproate exposure as a route to potentially increasing the risk of autism and other neurodevelopmental conditions being diagnosed (see here); an area that has also included discussions of a valproate-treated rodent model of autism (see here) being used in research. Of course, one needs to be aware that modelling autistic features in animals is not the same as autism and all its complexity presenting in humans (including the idea that autism rarely appears in some sort of diagnostic vacuum) and the resulting 'logical fallacies' that can arise (see here). But the assumption is that elements of certain core features of autism can potentially present in non-humans too, and could provide important clues as to the underlying nature of autism.

Going back to that 'no scientific evidence' statement made by the BVA in the lay press, you might be surprised to hear that actually, dogs have been the topic of some research interest in relation to their presenting with some of the features of autism. In an article titled: 'Can Dogs Have Autism?' some of that research was discussed. Starting from an article published way back in 1966 [1] observing behaviour in a dog "resembling human infantile autism" up to more recent peer-reviewed studies [2], several commentators have speculated on facets of autism being present in certain dogs and perhaps being more readily presented in certain breeds of dog. I've actually covered this topic previously in another post on this blog (see here) based on other research [3] reporting on shared biochemical parameters noted in some children and some canines: "tail-chasing Bull Terriers." This, on the basis that from a behavioural and biological point of view, humans are not a million miles away from canines and vice-verse. In short, there is a small scientific evidence base pursuing the notion that facets of autism may present in non-humans too.

Minus too many deep, philosophical musings about our relationship with animals and any evolutionary *connections* between human and animal behaviours, this topic did get me thinking about quite a few other things. It got me wondering whether there may be other behaviours and/or behaviourally-defined conditions / labels that are readily diagnosed in humans but that might also present in non-humans too. I also started to wonder about the myriad of animal-assisted 'interventions' that have been mentioned with autism in mind down the years (see here) and whether other possible research connections could be made as a result. Are we being too presumptuous by saying that the essence of autism is a uniquely human state?

And without trying to trivialise or make light of what autism means to many, many people, there is a long history of speculation when it comes to cats and autism...