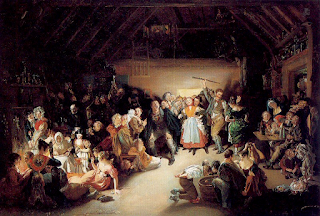 "All the world's a stage, And all the men and women merely players."

So said Bill (to his friends) Shakespeare in the comedy 'As You Like It'. Personally, I think William Shakespeare was spot on with that comment, and how we all spend our lives 'acting' out various roles; fine tuning our performance depending on the context and environment we find ourselves in.

With acting and the theatre specifically in mind, I'm talking today about the paper from Blythe Corbett and colleagues [1] reporting results following the use of "a peer-mediated, theatre-based intervention on social competence in participants with autism spectrum disorder (ASD)." Using a randomised - "assigned to the treatment... or a wait-list control group" - study design, researchers explored how a 10-week theatre-based intervention might affect various aspects of their cohort diagnosed with autism. It did indeed seem to have some effects in relation to social ability and in some cases, these effects were sustained, at least in the area of communicative abilities. I might add that some of this authorship group have some previous research form in this area [2] including on some previous description on the use of the SENSE theatre intervention [3].

On the face of it, drama or theatre-based intervention potentially seems like quite a good idea when applied to autism. Whilst trying to avoid sweeping generalisations about all autism or all performers, luvvies - a very melodramatic stereotype of some theatre types - are usually quite an outgoing group on the outside as part of their job in terms of the social requirements of performances and overcoming the stresses and strains of playing live to a paying audience day after day. Most theatrical performances involve public speaking and most involve the adoption of a persona or character typically different from that of the actress/actor. You can perhaps see how some of the qualities that coincide with the adoption of the theatrical profession may well 'enable' some people on the autism spectrum to navigate the complex social world a little easier; or at the very least, provide a safe training forum for practising such skills. That and providing an arena where children and adults on the autism spectrum can become a part of something and perhaps boost important aspects such as life satisfaction [4] (see here too) and I'm finding it difficult to name too many negatives for such a proposed intervention.

To close, having watched a great theatre production of The Shawshank Redemption recently, some opera for you...