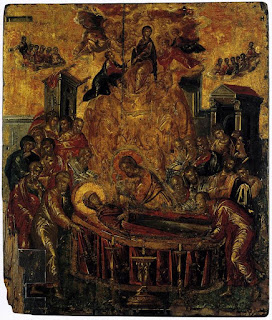 I can appreciate that some people might have looked at the title of this post and rolled their eyes. When I first came across the paper by David Black & Norman Rosenthal [1] (open-access) I too felt a slight 'woo' like tingling given my unfamiliarity with transcendental meditation (TM) either personally or professionally. A bit of background reading and a reminder of some song lyrics - "sometimes truth is stranger than fiction" - and I decided that this is peer-reviewed science that perhaps needs a little bit of discussion.

The Black/Rosenthal paper begins with some important statements about autism insofar as (a) the numbers of people being diagnosed as on the autism spectrum is increasing for whatever reasons, and (b) of the numerous comorbidities that are over-represented when it comes to a diagnosis, the various forms of anxiety must surely rank up there as some of the most disabling aspects when it comes to quality of life day-to-day. That also there is a pretty sizeable gap in the research literature about how anxiety can be managed or treated when it comes to autism is something else to mention.

Then: "Transcendental Meditation (TM) may be beneficial for treating anxiety in individuals with ASDs [autism spectrum disorders] by reducing stress." Certainly a quick scan of the peer-reviewed literature with the words 'transcendental meditation and anxiety', does indeed reveal something of a trend insofar as as TM as a potential intervention option. Take for example the meta-analysis by Orme-Johnson & Barnes [2] that concluded: "Overall, TM practice is more effective than treatment as usual and most alternative treatments, with greatest effects observed in individuals with high anxiety" with the requirement for quite a bit more investigation in this area. I might also add that 'treatment as usual' might not necessarily be the best comparator when it comes to this kind of intervention as per other examples (see here)

Onwards to the case reports highlighted. Interviews were completed with six individuals, all diagnosed as being on the autism spectrum and all have practised TM "twice per day for 15–20 min, at least 10 times per week, for at least 3 months." The interview seemed to have been quite an unstructured affair whereby questions about the use of TM and "any changes in functioning observed since following consistent practice of TM" were intermixed with focused questions on specific symptoms. Obviously the kind of evidence garnered from this type of study is pretty subjective and provides little in the way of formal comparisons between before starting TM and where participants were at the time of questioning not also including issues such as blinding. But, and it is an important point, self-report under such circumstances can provide some important insights into personal experiences and we are [scientifically] poorer without them.

As it happens: "all participants reported that the consistent practice of TM was helpful in a number of ways." Indeed, stress and anxiety featured quite consistently in the reports provided, with other effects noted in areas of sleep and concentration for example. From what I can gather, no-one reported any adverse effects from such practice, which is also an important point. The authors conclude: "The experiences of this group of individuals suggest that at least for some individuals with an ASD, (1) TM is easy to learn and consistently practice, and (2) that it may be very beneficial in reducing stress and anxiety, thereby improving overall productivity and quality of life."

Reiterating the methodological issues associated with this study and the requirement for further investigations, I'm persuaded enough by the case reports that more research time might need to be devoted to this area of interest. Allied to other investigations on the whole mind-body bit with autism in mind (see here) including the continued interest in the concept of mindfulness (see here), a sort of 'what harm could it do' philosophy has started to leak into my thoughts about this. I don't think this kind of technique will be for everyone on the autism spectrum (no 'one size fits all' and all that) and I don't necessarily buy into the TM movement as a whole. But if anxiety is a disabling feature for some on the autism spectrum, the alternatives to treating/managing such issues are currently few and far between...