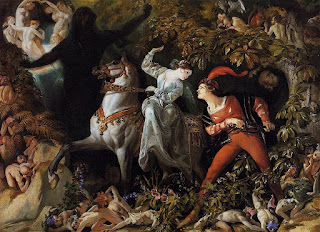 Regular readers of this blog probably know that I don't like sweeping generalisations when it comes to autism.

Y'know, all those ideas and theories that have been put forward down the years about the exclusivity and total generalisability of this, that and t'other to autism, which have inevitably fallen by the wayside as science truly starts to understand why autism is called a heterogeneous condition or even conditions (plural).

First it was issues with Theory of Mind (ToM) (see here) and now executive function issues has been given the 'cross-disorder' treatment [1]. I foresee the complicated issue of brain connectivity (hypo- or hyper-?) and autism heading the same way in the near future...

With all that in mind I'm cautiously bringing the review paper by Myriam De-la-Iglesia & José-Sixto Olivar [2] (open-access available here) to your attention today and a topic that can very much affect a person's quality of life in the context of autism: depression.

OK, to start I should perhaps be a little careful with using the word 'depression' as if denoting some singular, universal condition. It's not. Indeed, some people have suggested that depression or depressive illness is but one aspect of a 'cloud' of conditions (somatic and/or psychological) all interacting together, so one needs to be aware of the blurriness of any diagnosis. With autism in mind, depressive illness is a research topic in the ascendancy in terms of how it interacts with autism (see here) (including potentially interacting with other somatic comorbidity too) and what might be the key components of depression present alongside autism (see here). That certain types of depression might be over-represented when it comes to autism is a key issue too (see here).

De-la-Iglesia & Olivar took on quite a wide topic in their review article: "to examine, discuss, and provide proposals on diagnostic comorbidity of depression in children and adolescents with high functioning autism spectrum disorder (HFASD)" in relation to various aspects (prevalence, factors linked to vulnerability, risk of suicide and how to assess symptoms). I might add that their focus on "high functioning autism spectrum disorder" reflects their terminology and not mine and perhaps suggests further caution with regards to 'generalisability'.

Their review is open-access so it doesn't need any grand discussions from me, but I will pull out a few important points made in the article.

First: "Depression is common in prevalence in ASD." I don't need to say much more to that aside from forwarding the idea that preferential screening for depression in cases of autism might need to be more widespread than it currently is. This may also require some artistic medicine in terms of making screening more appropriate to the very heterogeneous target population.

Then: "children with autism that have depression are more likely to have a family history of depression." Being careful not to fall into yet more over-generalisation traps, there is some peer-reviewed evidence to suggest that issues with depression do indeed run deep in families where autism features. The potentially complicated relationship between anti-depressant medication use during pregnancy and offspring autism outcomes provides some of the clearest evidence of a relationship (see here).

Continuing: "the majority of the studies on children with autism show that the older the child and the greater the intelligence quotient (IQ), the greater the incidence of depression." Harking back to the title of this post, I think this is perhaps one of the most important features of depression when discussed in the context of autism. One could follow the De-la-Iglesia / Olivar line that: "The majority of higher functioning individuals with ASD are aware of their social difficulties and this awareness may in turn lead to greater pathology and the development of comorbid psychiatric problems" as accounting for the elevated risk of psychopathology but I'd be tempted to suggest that this might not be the only relevant factor. I do however also wonder whether 'awareness' of difficulties, might also account for other issues seemingly over-represented in autism such as certain types of anxiety too?

Then: "it is possible that the feeling of loneliness, fuelled by the poor social relationships that individuals with ASD have, contributes to greater levels of depression." I don't think that anyone would disagree with the idea that a person's environment could be contributory to their mood and onwards risk of something like depression. As per the findings reported by Schmidt et al [3]: "Participating in society was identified as the only factor predicting life satisfaction in individuals with ASD." Add to that also the idea that: "Negative events such as parents getting divorced, illnesses, death, frequent parental discord, or changing residences have been related to clinical depression, both in children and in adults" and one sees how many variables can combine to bring someone to the label.

Although perhaps not great dinner party conversation, I want to finish on the point made by De-la-Iglesia & Olivar regarding how depression manifesting in autism might tie into discussions about suicide (either ideation or completion).

There is a realisation that suicide ideation in the context of depression in autism is something we need to talk a lot more about (see here). This also taps into the quite disturbing trend of euthanasia requests where autism is mentioned (see here). The authors provide an interesting summary table of factors associated with risk of suicide in relation to autism (see here) which I found to be perhaps one of the most descriptive so far in the autism research literature. Indeed, the implication of 'affecting' one or more of the pathways listed to reduce any risk of suicide perhaps offers some important fodder for future research and practice in this area?