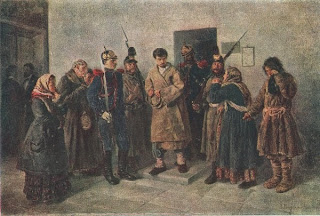 "Anxiety, depression and fatigue are common complaints in patients with untreated celiac disease and contribute to lower quality of life."

That was one of the conclusions reached in the paper by Fabiana Zingone and colleagues [1] (open-access available here) following their review of the research literature "on psychological morbidity of celiac disease." Celiac (coeliac) disease (CD), by the way, is the autoimmune condition classically treated via the use of a gluten-free diet (GFD). Readers might wish to peruse my training post on the condition for some further background information about some of the known 'hows and whys' (see here) as well as other posts on what we don't know about CD (see here) (hint: quite a bit).

The Zingone paper is open-access so it doesn't require any grand discussions from me at this point. "Our search of the available literature suggests that CD has a considerable psychological impact" is another way the authors discuss their findings and I for one, would not argue with such sentiments on potential extraintestinal manifestations of the condition. Importantly, they make a distinction between whether such 'psychological impact' may directly derive from having the disease itself or other reasons potentially relating "to the patient’s subjective perception of the disorder and of the GFD used to treat it."

I was also taken by some of the 'clinical implications' listed by the authors when it comes to the 'considerable psychological impact' including that: (1) "GFD improves quality of life (QoL) in symptomatic patients, but not always in asymptomatic patients", (2) "Anxiety and depression may affect dietary adherence and QoL" and (3) "Fatigue is sometimes the unique symptom at CD presentation."

Point (1) taps into the idea of a better cost-benefit profile from the use of a GFD when people actually see such a diet improving their health and wellbeing. As per other rumblings on this blog, I might also suggest that this effect extends into some of the asymptomatic group too (see here). Point (2) raises an important issue that potential psychological effects associated with CD might have important implications for things like sticking to the diet. I wonder if that also includes those slightly outside of the classical presentation of CD too? Point (3) on fatigue as a possible 'unique' symptom of CD takes me back to a distant post titled 'gluten relations' and the idea that screening for CD or even the broader non-coeliac gluten sensitivity (NCGS) might be indicated in a few 'fatigue-linked' conditions including cases of chronic fatigue syndrome / myalgic encephalomyelitis (CFS / ME) (sorry, SEID). By saying that I'm not making any value judgements about SEID simply being CD or vice-versa, merely that within the spectrum of fatigue-manifesting conditions, one might find one or two surprising results [2] as you might in other conditions too [3].

Yet after all that, mass screening for CD is still not indicated? [4]