Predicting the onset of schizophrenia? 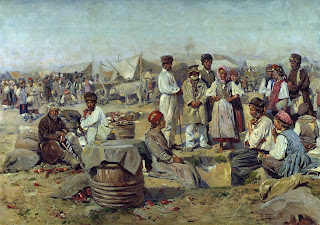 "A lower level of inflammatory response indicated by PTX3 [pentraxin-3] might be implicated in developing schizophrenia."

That was the primary conclusion reported by Natalya Weber and colleagues [1] (open-access here) who "tested preonset serum specimens from 160 US military service members who were later diagnosed with schizophrenia or bipolar disorder and 160 matched controls without psychiatric disorders."

PTX-3 by the way, is a compound of some note when it comes to the concept of inflammation, residing in the same family as a better known inflammatory-related compound, C-reactive protein (CRP) (see here). The difference between CRP and PTX-3 seems to be down to CRP being a 'short' pentraxin and PTX-3 being a 'long' one.

Weber et al assessed levels of PTX-3 in "first available serum specimens" of 160 military personnel who were "later diagnosed with schizophrenia or bipolar disorder" (n=80 respectively) and compared them with 160 matched controls. As per other work by authors on the Weber paper [2], using military cohorts has some significant advantages when it comes to potential biomarker work in this area (see here). They reported that: "PTX3 levels among subjects with schizophrenia were significantly lower... than the levels among their paired controls" thus indicating that prior to the onset of schizophrenia, PTX-3 levels might be something to watch for risk of developing the condition. The authors even went as far as to say that: "a level of PTX3 below the median (0.6 ng/ml) was associated with an OR [odds ratio] of 3.0 (CI, 1.6–5.7)" when it came to risk of subsequent schizophrenia.

This is interesting data which, as the authors point out, is strengthened by "including the follow-up of an initially disease-free population with subsequent complete and reliable case/control ascertainment" alongside the collection of biological samples "years before disease onset". Military personnel are screened and screened over their time serving, thus making this population about as valuable to research as all those archived newborn bloodspot cards that I'm so interested in (see here). The authors do caution that their results may not be entirely generalisable to the population at large as a result of their 'captive audience' (how many civvies spend their days like military personnel?) but the strengths of the study perhaps outweigh the limitations.

The idea that the immune system and the orchestration of its arsenal of compounds might be perturbed when it comes to a behavioural/psychiatric condition like schizophrenia is by no means a new idea (see here for example). That being said, science is still fumbling around trying to make sense of the idea that immune function / inflammation might impact on something like schizophrenia and the specific hows and whys of the relationship. Weber et al do speculate on what their results might mean as per comments that: "Long-lasting or temporal lack of PTX3 could potentially impact pathogen recognition, activation, and orientation of the adaptive immune response and/or antibody production." Further: "Impairment of any of these functions, particularly those where PTX3 plays its unique role, could lead to a vulnerability to the neurotropic pathogens associated with schizophrenia and bipolar disorder." Part of those 'neurotropic pathogens' must surely include the body of work referring to a possible role for Toxoplasma gondii in relation to some schizophrenia (see here).

Interestingly also the authors talk about how their findings might relate to the issue of autoimmunity and how their findings might be contributory to immune system "derailment into a dysregulated state of autoimmune activation and damage." As per my discussions on autism and autoimmunity (see here for example) I do think there is a lot more to see in this particular area with schizophrenia also in mind (see here), perhaps also mediated by some interesting connections to the human endogenous retroviruses (HERVs) among other things. And yes, before you ask, HERVs have been implicated in cases of schizophrenia and perhaps even with the words 'molecularly mimicry' and 'superantigen' in mind [3].

More research in this area please.