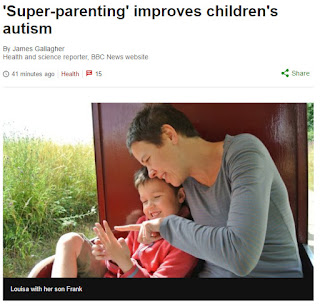 The title of this post is partially taken from the BBC take on the findings reported by Andrew Pickles and colleagues [1] detailing a long-term follow up (and slight adjustment to the calculation of behavioural scores) of the Preschool Autism Communication Trial (PACT). PACT by the way, is a strategy based on the important tenet of shared attention where: "The approach aims to help parents adapt their communication style to their child’s impairments and respond to their child with enhanced sensitivity and responsiveness."

OK, just before I get started, use of the term 'super-parenting' in that headline is a bit of a fail by my reckoning and I don't doubt that this will probably change/have changed quite soon. Appreciating that there is as much variability in parenting a child with autism as there is parenting a child who does not have the label, the implication that parents of autistic children are somehow 'not doing it right' made by such a headline is frankly, a little rude. Many parents with children with autism are already 'super-parenting' well beyond what you might imagine to be humanly possible.

The study... well, greeted with quite a fanfare as words like 'breakthrough' are used (see here for example) the findings are basically a longer-term follow-up of the original PACT trial [2] which unfortunately reported at the time: "On the basis of our findings, we cannot recommend the addition of the PACT intervention to treatment as usual for the reduction of autism symptoms." Indeed, allied to some of other quite high-profile unspectacular scientific results based on the analysis of short-term parent-mediated intervention discussed on this blog (see here), there is quite a U-turn seemingly being adopted in this area (see here too). I might also add that even an analysis of the cost of PACT vs treatment as usual (TAU) did "not support the cost-effectiveness of PACT + TAU compared to TAU alone" [3]!

That all being said, the recent results from Pickles and colleagues are not bad at all. Tracking down some 120 participants of the original 150-ish cohort, researchers assessed them [blinded in some cases] "with the ADOS Comparative Severity Score (CSS)" among other things to see whether there were any behavioural presentation differences between those who were in receipt of PACT vs. those assigned to TAU. Differences were noted: "the severity of autism symptoms was significantly lower for children in the intervention group than for children in the treatment-as-usual group." And with that the authors pronounce: "We now show that a 12 month parent-mediated preschool intervention can produce sustained improvement in child autism symptoms and social communication with parents, which remained at nearly 6 years after the end of treatment. These findings support the potential long-term effects and value of early parent-mediated interventions for autism." I might also add: "these results are encouraging and provide evidence that sustained changes in autism symptoms can be possible after early intervention, something that has previously been regarded as difficult to achieve."

Caveats? Well, there are a few, not least the observation: "we cannot be sure how our results would generalise to young children with less severe symptoms." The authors also stress that the word 'cure' is not part and parcel of their results, and when it came to important comorbidities such as anxiety: "our related hypothesis that levels of child anxiety, which are often linked to levels of restricted and repetitive behaviours in autism,would also show a treatment effect at follow-up was refuted." Autism rarely exists in a diagnostic vacuum. Given also the quite long time between original and follow-up, it's not outside of the realms of possibility that other 'interventions' may also have 'chipped in' when it came to contributing to the behavioural outcomes noted or there being some element of natural waxing and waning of symptoms at work for some.

For the scientific sticklers out there (good on yer!), there are also a few details included in the study appendix pertinent to protocol and analysis amendments that were included in the study as it is presented, including dropping the Autism Diagnostic Interview-Revised (ADI-R) from the assessment battery and reported results. Does this mark the beginning of the end for the ADI-R I wonder?

So there you have it. After a slightly shaky start potentially illustrative of only modest short-term effects, early intervention of this type might actually have some more positive longer term effects. Of course, I'd like to see some further independent replication of this study and such behavioural intervention does not disqualify other approaches as also potentially being useful for some on the autism spectrum (see here for example). It's all about getting the right support and strategies in place for each individual person and perhaps getting the timing right too (see here).