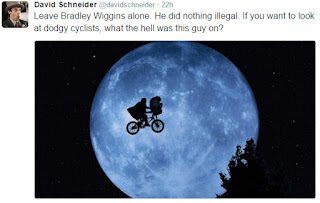 "At 13 years, adolescents who had received a diagnosis of chronic fatigue syndrome/myalgic encephalomyelitis (CFS/ME) who were attending specialist CFS/ME services were more than two times more likely to be obese than adolescents in the general population."

At first reading, I wasn't particularly surprised by the findings reported by Norris and colleagues [1] (open-access) drawing on data partly derived from everyone's favourite UK longitudinal birth cohort: ALSPAC (Avon Longitudinal Study of Parents and Children). If one assumes that those suffering (yes, people do suffer from CFS/ME) might not be engaging in an optimal exercise regime nor eating the best of diets one can perhaps see how the condition might be a susceptibility factor for issues with weight. That being said, and after some further thought, the Norris findings might not be something entirely representative of the effects of CFS/ME either given documented cases of malnutrition and sadly, death (see here). Sweeping generalisations are, yet again, not required.

So, the Norris group findings... well, some of the authors are not completely unknown to the idea that eating habits might be perturbed in cases of CFS/ME as per other entries on this blog (see here). This time around ALSPAC data was joined by "data collected from all National Health Service (NHS) paediatric specialist services that participated in the CFS/ME National Outcomes Database (NOD) between August 2004 and October 2014." The aim was to "obtain prevalence estimates for obesity at two time points during adolescence (ages 13 years and 16 years), in three groups of adolescents representing a continuum of CFS/ME severity (healthy population, CFS/ME based on responses to questionnaires and clinically diagnosed CFS/ME)." In case your a little confused, the CFS/ME by questionnaire response group were derived from ALSPAC. The categorisation of obesity or not was made by clinical height and weight measurements from the ALSPAC data but was a little less 'formalised' for the more detailed diagnosis CFS/ME group (in clinic) including measurement "in the clinic or GP surgery or obtained from parental report." Body mass index (BMI) was calculated from said measurements.

Results: well, aside from that opening sentence on 13 year olds, the authors also reported that for those with CFS/ME: "At 16 years, they were more than 4 times more likely to be obese compared to those in the general population." The authors noted that the association between CFS/ME and obesity was 'driven' in the most part by "those attending the specialist services, thus representing those with CFS/ME severe enough to be referred for specialist treatment."

"Health professionals should be aware of this association to encourage appropriate screening for obesity and its possible complications when assessing patients with CFS/ME." I agree with the authors conclusions stemming from their findings but I think a word of caution also needs to be applied too.

For those who've followed the CFS/ME research scene for the past few years, you'll probably already have heard about the PACE trial and the 'suggestion' among other things that graded exercise therapy (GET) might be something to consider "to gradually increase how long you can carry out a physical activity." PACE has stumbled in recent times following a long and drawn out (and expensive) 'battle' to access the data behind the headlines; having already seen a 'downgrading' of effect from some agencies. Now, think to yourself what would be a health professional's response to being presented by a patient who is obese? Change your diet? Maybe do a little more exercise? Hmm...

I'm not saying that young people with CFS/ME who present with weight issues shouldn't be provided with the same appropriate medical advice and care as everyone else with such issues. I'm not saying that every health professional would be prescribing pounding the treadmill or anything related given the quite unique issues associated with CFS/ME. I do however think that set within the research history created partly as a result of initiatives such as the PACE trial, there are sensitivities that need to be observed before sweeping healthcare advice is provided en-masse. That also 'not out-running' a bad diet is gaining some traction is an important point to make as other areas of research could yet be explored bearing in mind how exercise might impact on the gut microbiome of some CFS/ME (see here) for example. That might also includes the gut virome [2] too...