The things people say about neurodiversity... 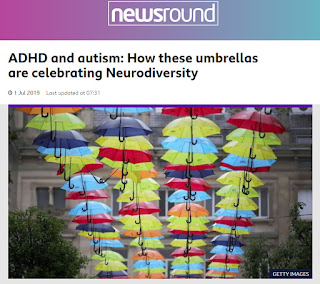 That was one of the memorable quotes that was included in a piece on the BBC Newsround website recently highlighting an arts project designed "to raise awareness and celebrate a range of conditions under the umbrella term of Neurodiversity, including autism and dyslexia." More information about neurodiversity by the way, can be seen here. The page has seemingly since been altered for whatever reason...

Whilst noble in intent, the inclusion of evidence-free phrases about 'being wired differently' were included in the original text. Even more worryingly was the suggestion that: "The idea behind Neurodiversity is that conditions - such as autism - should be seen not as disabilities, but as perfectly normal differences between people." Autism shouldn't be seen as a disability eh? I'm sure that lots and lots of autistic people and their families and loved ones may disagree with such a contravention to how autism is actually diagnosed (on the basis that: "symptoms cause clinically significant impairment in social, occupational, or other important areas of current functioning").

Such a piece did not go unnoticed, with even the person credited with coming up with the term neurodiversity calling it out and posting a reminder to everyone about what was intended by her original description of the term. She's of course right to point out that everyone is neurodiverse, and how associated terms like neurotypical (NT), that still keep cropping up in the peer-reviewed science literature, are about as evidence-free as one could possibly get (see here).

The inclusion of other phrases citing 'famous people' who should also be considered neurodiverse adds to the fluffiness of the original news piece. That being said, at least there wasn't an attempt to rewrite history as has kinda been suggested on other occasions (see here) nor were the words 'everyone hovers somewhere along the autistic spectrum' used (see here) so one should be thankful for that.

I get that such news pieces want to encourage people to think differently about those with autism, ADHD and various other labels. I get that role models are important to young people whether diagnosed or not with this, that and t'other. But I do expect more from valued news channels such as the BBC. I expect them to be evidence-based. Even Newsround (which served me well in my younger years) should be evidence-based given the audience that it's aimed at. And to perpetuate a myth that autism is not a disability is, in my view, only going to further contribute to the wide-ranging inequalities that many people on the autism spectrum face day in, day out whether their disability is 'hidden' or not.