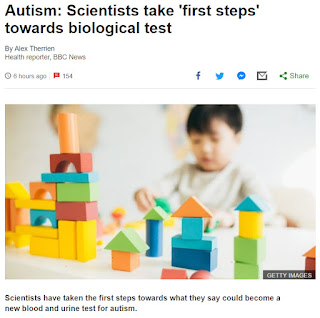 Monday 19th February 2018. I opened my computer up early in the morning and lo and behold, headlines about autism appeared, as exemplified by the BBC article titling this post: "Autism: Scientists take 'first steps' towards biological test." A cold shudder ran down my body as memories of previous 'Super-parenting' improves children's autism and similar headlines sprung to mind and with it, the question of whether big claims were being made...

The paper behind the headlines this time around was from Attia Anwar and colleagues [1] (open-access) and I have to say at first sight I was really rather interested in the specific topic under investigation. Namely: "to explore the diagnostic utility of proteotoxic biomarkers in plasma and urine, plasma protein glycation, oxidation, and nitration adducts, and related glycated, oxidized, and nitrated amino acids (free adducts), for the clinical diagnosis of ASD [autism spectrum disorder]." Interested because the words 'amino acids' (an area of interest to this blog) were mentioned and also that their description of using "stable isotopic dilution analysis liquid chromatography-tandem mass spectrometry" plays to the analytical chemistry nerd that I've seemingly become down the years.

So, bearing in mind the Anwar paper is open-access, what were the hows-and-whys of this 'first steps' research? Well, the initial premise was a sensible one as words like '3-nitrotyrosine (3-NT)' are mentioned following other research noting this compound with some autism in mind (see here). It all ties into the process of oxidative stress and neuroinflammation that are becoming more readily accepted to be part-and-parcel of at least some autism (see here and see here). Researchers set out to see if they could detect some important compounds involved in the process of protein homeostasis (amino acids are the building blocks of protein) and whether, by using the process of machine learning on the derived data (see here for another example of this being applied to autism), the possibility of a diagnostic test for autism might be forthcoming from such work. Yes, this was another example of metabolomics being applied to autism research (see here and see here) and seems to continue a research journey from members of this authorship group [2].

Urine and plasma samples were the chosen analytical media, as authors report on the recruitment of 38 children diagnosed with an ASD and 31 not-autism controls. Yet again, the words 'healthy controls' are used to denote not-autism; something that we really shouldn't be seeing in this day and age. I'd also, by the way, say the same things about the term 'neurotypical' too (see here). The autism group did seem to have quite an extensive diagnostic work-up as both ADOS and CARS scores are presented. Spot blood and urine samples were provided by all and metabolomic analysis was begun...

Results: bearing in mind the significant complexity of both urine and plasma samples when it comes to the presence of small molecules and metabolites, the use of that mass spec method made short work of detecting the glycation markers indicated for study. I note also authors also provide some results on various amino acids in both urine and plasma that is, I think, rather important.

The first thing that struck me was the authors use of a compound called creatinine to correct for sample strength and dilution. I'd like to think I know a thing or two about creatinine (urinary) in relation to some autism on the back of a bit of published research a decade or so back [3]. Our conclusion then and also in some other independent work since (see here) is that caution is required when using creatinine as a corrector with autism in mind...

Having said that, a few findings are noteworthy: "we identified changes in plasma protein AGE [advanced glycation endproducts] and oxidation adducts, increased CML [Nε-carboxymethyl-lysine], CMA [Nω-carboxymethylarginine], and DT [dityrosine] and decreased 3DG-H [3-deoxyglucosone] in ASD." I'm not all too familiar with all of those compounds listed but going back to my observation on oxidative stress being something pertinent to some autism [4], I think there are some important connections to be seen. I note also that at least one of the findings - increased DT residue content of plasma proteins - might also provide a role for those trillions of wee beasties that call us home, the gut microbiota. Mention of the gastrointestinal (GI) tract in the context of autism is likely not to sit well with some people, despite multiple evidence of involvement for some in both a functional sense (see here) and also at a more biological level (see here).

Then to the headline maker: "Algorithms to discriminate between ASD and healthy controls gave strong diagnostic performance with features: plasma protein AGEs—CML, CMA—and 3-deoxyglucosone-derived hydroimidazolone, and oxidative damage marker, DT. The sensitivity, specificity, and receiver operating characteristic area-under-the-curve were 92%, 84%, and 0.94, respectively." Those sensitivity and specificity stats aren't bad at all. They are certainly on a par with other 'classification' attempts with autism in mind, such as when cortisol and a suite of cytokines got the same analytical treatment for example (see here). The trouble is that such stats are based on a relatively small sample size and indeed, children aged between 5-12 years old. Given that many children (but not all) are diagnosed quite a bit earlier than 5 years of age, one has to wonder how relevant any biological test might be at such a later age. One is left feeling that perhaps the discrimination analysis part of the Anwar paper should have perhaps been left until replication on an independent cohort with a larger sample size was carried out, and perhaps relying on more than one testing occasion.

I was also a little bit 'put out' that I couldn't find any 'limitation' discussions in the paper by Anwar et al. There was lots of chatter about how this, that and t'other might relate to biological processes pertinent to some autism but in the discussion section there was very little about what could be wrong with the results as they stand (e.g, small sample sizes). In the current age also when autism is more and more being talked about as NOT being a stand-alone diagnosis (see here) and indeed, probably is a more plural diagnosis ("the autisms"), it is always worthwhile mentioning how any obtained results might have to be framed in those contexts. Yes, authors did have exclusion criteria for study entrance: "Subjects with ascertained medical and neurological comorbidity were excluded, through a medical work up including electroencephalography (recorded during awake and sleep), cerebral magnetic resonance imaging, standard clinical and neurological examination, neurometabolic, and genetic investigations (including comparative genomic hybridization array, molecular assay for Fragile X and MECP2)" but autism pure might not be so typical in the real world [5].

Although some people have reacted quite strongly to the Anwar results, I do think this is quite a good study. No, as it stands, I don't think it can say that autism might be diagnosed on the basis of a urine and/or blood sample. Indeed, we've been here before (see here for example). But it does provide some welcome insight into some of the potential biology associated with at least some autism, and once again, champions the use of some really, really advanced metabolomic technology to provide potential systems biology insights into at least some autism...