Organic acids as biomarkers of autism?

Whilst I am always a little cautious about the use of the word 'biomarker' when applied to a heterogeneous condition like autism, even the autisms, I am nevertheless always intrigued at any reasonable prospect reported in the scientific literature. So it was when I read the paper by Joanna Kałużna-Czaplińska and colleagues [1] and their assertion that "there is a significant metabolic difference between autistic and non-autistic children" and onwards that "21 metabolites were identified as potential biomarkers".

Let me expand on this a little... 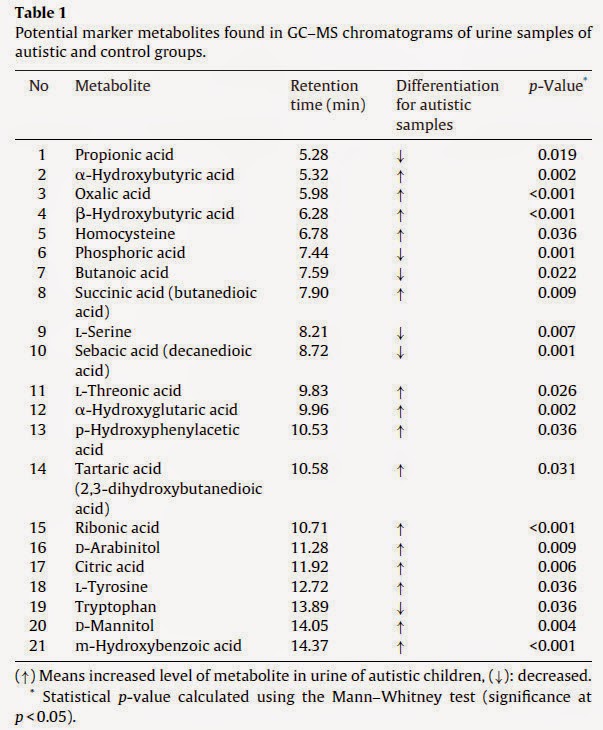 Obviously the Kałużna-Czaplińska results are preliminary and in need of further independent replication. I note that quite a bit of the other literature in this area of biomarkers tend to use both training and test sets, where training samples provide your initial compounds of interest and test sets do just that, test your biomarker assumptions (see here). This wasn't the case in the current study but still leaves the door open to independent verification. That also the word 'comorbidity' does not seem to be mentioned as part and parcel of the autism group means the questions of how widespread comorbidity was in the autism participant group and whether this might have exerted an effect on the results obtained are unanswered. I might also quibble about the way that peaks in the TIC were assigned a compound name: "Peaks with the similarity index more than 80% were assigned compound names..." but now I'm just nit-picking.

That all being said, I do see some promise in the results obtained by Kałużna-Czaplińska et al. I note in another paper by some of the authors [3] they talk about how probiotic therapy might impact on both some of the behavioural measures of autism and also levels of one of the compounds picked up in their latest analysis, D-arabinitol. Again, I'd like to see more research done on this, alongside their other suggestion on the use of B vitamins (and magnesium) potentially affecting organic acids in cases of paediatric autism [4] talked about in a previous post (see here). The focus on the inner working of the gut, and particularly the trillions of gut bacteria which call us home, potentially being connected to some of these biomarkers, ties in well with an emerging autism research area (see here).

Music to close, and yet again my brood provide the inspiration as Bob Marley is fast becoming a YouTube favourite in our home with the classic One Love. You know you're getting old when your kids start listening to cooler music than you do...