I have to say that I wasn't all that surprised when I read the conclusions to the study by Eva Kočovská and colleagues [1] (open-access here) talking about significantly lower levels of 25-Hydroxyvitamin D3 (25(OH)D3) levels detected in their small cohort of young adults diagnosed with an autism spectrum disorder (ASD) compared with various control populations. 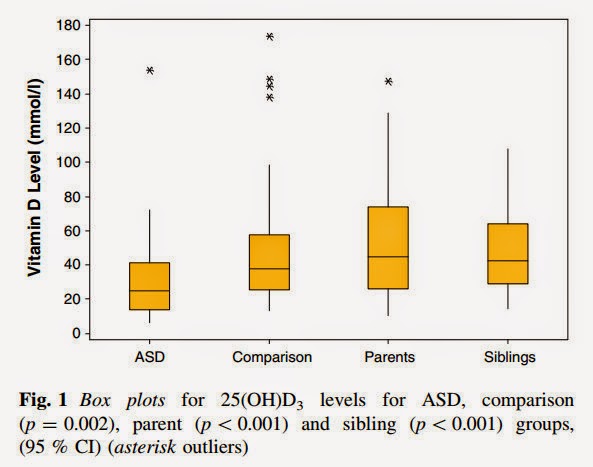 A deficiency or insufficiency of vitamin D - the sunshine vitamin/hormone - in relation to quite a few cases of autism is something that has been talked about more than once on this blog (see here). The value-added bit to the Kočovská findings was the suggestion that lower levels were detected "in young adolescents/adults with ASD" based in the Faroe Islands, where a lack of UVB exposure as a function of geographic position is to some extent compensated by "a diet rich in large oily fish containing vitamin D". I might add that this authorship group have talked vitamin D and autism in a previous paper [2].

The Kočovská paper is open-access but a few pointers might be in order:

The authors are rightly cautious about drawing too many conclusions from their results as they stand. They talk about low vitamin D levels in cases of autism potentially being linked to issues like being a picky eater [4] or "autism impacting on a family/child’s lifestyle" as per a preference for more indoor activities rather than those more likely to provide some sun exposure (see here). Body mass index (BMI) is also talked about as a function of the growing interest in vitamin D levels in those who are categorised as overweight or obese [5] which is something that continues to crop up in the autism research literature (see here). We can't also rule out some effect from comorbidity - ESSENCE as one of the Kočovská authors has described it - particularly in light of other research starting to talk about ADHD (attention-deficit hyperactivity disorder) and vitamin D deficiency (see here) and what seems to be emerging about the heightened comorbid prevalence of autism and ADHD (see here). Same also goes for something like depression too (see here) and its links with at least some autism [6]. Plenty of variables which have the ability to influence the Kočovská results.

But... on the back of previous studies indicating that vitamin D levels might be perturbed in some cases of autism I find myself similarly drawn to another conclusion reached by the authors: "the low vitamin D levels could be an indication of life-long vitamin D deficiency in ASD, and this hormone deficiency could, at least theoretically, have been involved in early aberrant development of the brain in these individuals, leading to the development of ASD". I say this acknowledging that Kočovská et al only looked at a single measurement of vitamin D and the evidence that maternal or cord blood levels of vitamin D don't seem to have much of an effect in this process as per the findings from Whitehouse and colleagues (discussed here) and some more recent work [7]. I don't think though anyone has actually tracked vitamin D levels across the child- and adulthood with autism in mind...

I might also draw your attention to a few other areas where vitamin D deficiency in cases of autism might also merit additional research... stop me if you've heard me talk about these before. So: autoimmunity and vitamin D levels as per the Mostafa findings (see here). GcMAF and vitamin D as per the Hornig/Lipkin patent application (see here). And then there is leaky gut and vitamin D (see here) in light of another area with some autism interest (see here); all worthy of further research consideration alongside further examination of those vitamin D receptors which are currently lacking in the autism research literature.

The news recently of "a remarkably consistent" relationship between "the lowest quintile of serum 25(OH)D concentration.. associated with increased all-cause and cardiovascular mortality" based on the findings from Schöttker and colleagues [8] (open-access here) is potentially pertinent. Without using scare tactics or anything like that, such findings should perhaps have special meaning in light of the Kočovská results and the news that over half of their autism cohort presented in the severe deficiency range (<25 nmmol/l). With no medical or clinical advice given or intended, I will draw your attention to the paper by Aloia and colleagues [9] (open-access) and the guidance they provide on potentially overcoming deficiency...

[8] Schöttker B. et al. Vitamin D and mortality: meta-analysis of individual participant data from a large consortium of cohort studies from Europe and the United States. BMJ. 2014 Jun 17;348:g3656.