Reelin' in OPs in autism

Get that pinch of salt ready again, as hopefully I'm not straying too far outside my area of competence with this post.

A recent entry on the SFARI blog talked about the potential pitfalls associated with too heavy reliance on animal models of autism spectrum disorders (ASDs) from the point of view of replication and reproducibility. Without wishing to strike up the 'I've talked about that before' orchestra, I've talked about similar things before(!) on this blog with specific reference to one particularly interesting mouse model of autism - the BTBR dangermouse.

Bearing in mind that we really shouldn't be putting all our research eggs into the mouse model basket for autism or any other condition under investigation, I was drawn to the paper by Brian Mullen and colleagues* (open-access) discussing their findings based on a Reeler mutant mouse model - mice not producing as much reelin as they should be - exposed to chlorpyrifos oxon (CPO), a metabolite of the organophosphate (OP) pesticide, chlorpyrifos. Quite a while back I had started to talk about OPs and autism (see here) and some curious findings in relation to the use of galantamine. Keep that compound in mind for now.

OK, perhaps it would be best if I provided a few descriptions first before venturing in the nitty-gritty of the Reeler OP exposed mouse.

Wikipedia provides quite a good overview of the Reelin gene and reelin protein findings so far in autism. Suffice to say that it is a complicated picture but basically boils down to (a) the neuronal tasks undertaken by reelin potentially overlapping with some of the ideas of how autism - some autism - might come about and (b) the positioning of the Reelin gene - human chromosome 7q22 - thought to be an autism gene 'hotspot' (something which is coming back into vogue recently as per the paper by Michaelson and colleagues** on regional hypermutation hotspots in autism). This paper from Persico and colleagues*** (open-access) from a few years back is as good an introduction as any to the hows and whys of reelin and autism.

Chlorpyrifos? Well, quite a good description about this OP can be found here. As with many pesticides - OPs in particular - chlorpyrifos works by inhibiting the break down of the neurotransmitter acetylcholine (ACh) by binding to the active site of the acetylcholinesterase (AChE) enzyme. In animals (and humans) this eventually leads to a build up of ACh which leads to things like neurotoxicity and death. It is with this mechanism in mind that quite unfortunately a few nerve agents also work in a similar fashion.

So then the Mullen paper is open-access, but here are a few highlights:


I'm intrigued by the Mullen findings, accepting again the mouse model issue and how, as much as science tries, mouse models of autism are not person models of autism. I talked earlier for example about how galantamine was being touted as a possible intervention option for some people with autism (see this open trial by Nicholson and colleagues**** and this trial by Novotny which I'm still searching around for peer-reviewed results).

The primary mode of action of galantamine is with reference to its AChE-inhibiting properties, which place it not a million miles away from the actions of compounds like OPs and indeed chlorpyrifos. The difference predominantly lies in galantamine being a reversible AChE inhibitor and OPs exerting a more final irreversible effect on AChE. If one therefore assumes that the mitigating effects of CPO exposure on reelin deficient mice are potentially as a consequence of those AChE inhibiting effects and not just as the authors suggest CPO "increasing the pool of full-length reelin" by affecting reelin degrading enzymes, where does that leave us? 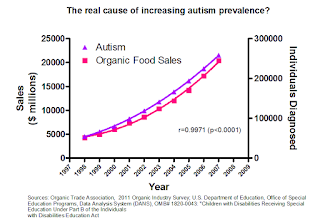 I'm not for one minute suggesting that OPs are, in any way, shape or form 'protective' against autism or anything else given their potentially important effects on neurodevelopment*****. But perhaps that the cholinergic system might require a little more investigation with autism in mind as per studies like this one from Ray and colleagues****** and talk of some blanket effect from pesticide exposure on the rising numbers of cases of autism is a little premature.

Finally, it also make me wonder if that graph of autism prevalence and organic food sales (shown above) which seems to be doing the rounds might actually provide something more than just a chuckle about correlation and autism, particularly if reelin is involved?