Is the entire human race destined for obesity?

I will readily admit that I am slightly outside of my comfort zone when talking about obesity and the research around it. Don't get me wrong, I am very interested in how our weight affects our health particularly when related to conditions like autism and the increasing interest in the physical health of people with autism. Moving away from just obsessing on the 'triad' of behavioural traits is in my view a point where we start making real progress in equality for people with autism in terms of things like appropriate access to healthcare and levelling the 'life opportunities' playing field. Outside of autism however, more general obesity and diet research is a little more of a learning curve for me.

The BBC News Magazine carries an interesting take on the various statistics collected over the years relating to levels of overweight and obese people in the UK titled 'Go Figure: will we really keep getting fatter?'.

Michael Blastland authors the piece, and by coincidence and completely unrelated to this post, is I think, the same Michael Blastland who wrote this article for the New Statesman a few years back about his very personal experience of autism as father to Joe. I think it is the same chap but don't take me word for it.

The BBC article is interesting one. It shows how the figures look according to official sources and how various soundbites have perhaps 'inflated' the issue in terms of the current and future prevalence of overweightedness (?) and obesity. One particular point caught my eye with regards to the use of prediction and where we were predicted to be in terms of the rate of obesity a few years back and what the current reality is. Stand by for a blog first as I attempt to paste in one of the tables presented in the article, fully referenced to Blastland M* and the BBC of course. 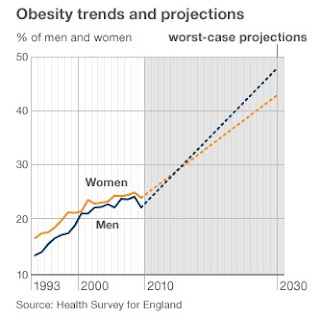 In my daydreaming moments, I often wondered whether anyone has (or would want to) go back through the ages and look at the various predictions made 20, 30 or 40 years ago about lots of things related to health, just to see how right (or wrong) we were. Lies, damn lies and statistics perhaps?

Without wishing to come across as some kind of 'agitator', I did post a while back about how Governments and other bodies deliver the health message, the evidence-based health message. Added to the lessons to be learned, I would perhaps echo the comments of Mr Blastland which amount to a request for people to look at the figures and make their own minds up rather than taking things at face value.