'Vulnerability' to radicalisation and autism or autistic traits: tread carefully 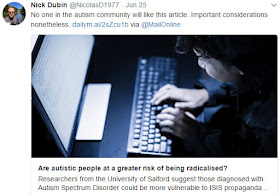 In a recent piece for The Conversation, Dr Clare Allely asked a very difficult but potentially important question: "Are autistic people at greater risk of being radicalised?"

Based on her own research [1] and in light of several high profile cases where an autism diagnosis has been mentioned in the same breath as various terrorist-related offences, some with a potential radicalisation element to them (see here and see here) it is indeed timely that such a question is posed.

This is a sensitive area. Yes, I very much appreciate that people commit crimes, not their diagnostic labels (see here) and sweeping generalisations are not required, but "it is crucial to consider how the diagnosis of autism may have presented as a contextual vulnerability" when it comes to such issues.

There are various sensitivities to consider before it comes to even examining any possible link between vulnerability to radicalisation and autism or autistic traits. One needs only look at the effects of years and years of sweeping generalisations about schizophrenia and 'dangerousness' for example (see here) to see how stigma can build up quickly and how damaging it can be on a personal and societal level. Science and clinical practice need to tread very carefully indeed, whilst also not shying away from any uncomfortable results.

The Allely piece for the The Conversation touches however on several important points pertinent to the idea that 'vulnerability' to radicalisation may be perhaps elevated in relation to a diagnosis of autism for various reasons. I've stressed the word 'vulnerability' for several reasons...

First off, use of the word 'vulnerable' - "unable to take care of him or herself, or unable to protect him or herself against significant harm or exploitation" - in the context of autism is, I think, under-used. I don't say that in any 'pity me' fashion but rather that many people on the autism spectrum are/should be classed as 'vulnerable' despite any [typically sweeping] notions about being 'high' or 'low' functioning or other description of their positioning on the autism spectrum. There are several other examples of this vulnerability in action in the peer-reviewed literature [2] and indeed, autistic commentators have themselves noted various other scenarios (see here) specifically where enhanced victim risk of coercion and bullying is part and parcel of such vulnerability. With such vulnerability comes inevitable heightened risks for all manner of potential adverse outcomes.

Dr Allely also talks about how: "Searching for a “need to matter” or social connection and support for someone who is alienated or without friends may also present as risk factors" when it comes to enhanced risk for radicalisation. I think again, this may be something of an important point when it comes to parts of the autism spectrum. The idea for example, that those on the autism spectrum do not want (or need) friends is an unfortunate side-effect of years and years of further sweeping generalisations when it comes to trying to define the spectrum. The whole 'lacking in empathy' thing (myth?) has, I think, played a big part in perpetuating the idea that difficulties in forming relationships with peers for example, has sometimes been misinterpreted as not wanting relationships with others. Obviously one has to guard against making counter sweeping generalisations that everyone with autism wants lots and lots of friends around them all of the time, but what seems to be true is that autistic people do in the most part want significant others around them at certain points and want the benefits that friendships and belonging bring under their own terms. The vacuum created by not belonging to a social circle or not having that 'need to matter' to others is something faced by at least some on the autism spectrum and could therefore be considered a risk factor for vulnerability to issues like radicalisation especially when others with an ulterior motive come forward with a seemingly welcoming face and message. Indeed, one might also see evidence of this when one talks about hacking or cyber-terrorism in the context of a diagnosis of autism...

"Autistic special interests such as fantasy, obsessiveness (extreme compulsiveness), the need for routine/predictability and social/communication difficulties can all increase the vulnerability of an person with ASD [autism spectrum disorder] to going down the pathway to terrorism." I'm not in total agreement with everything said in that sentence but some of it could ring true. As difficult as this may be to face, forensic examination of cases where autism has been cited alongside terrorist activities has noted obsessions in particular, to be a potentially important variable. As a case in point: "The court heard Smith had been interested in making bombs since the age of 10 and said it was "something to do when he was bored"". A long interest in 'making bombs' at any age is not something typical; let alone when starting such an interest as a 10-year old. The source of such interests is likely to be complex but, with all the media attention paid these days to terrorism and talk of the objects of terrorism and the like easily found on the internet and other media, it's not difficult to find a context for why someone might become utterly engrossed and/or obsessed with such material for years and years.

What's missing from the Allely article? Well, I'd like to see quite a few more resources dedicated to the idea that comorbidity around a diagnosis of autism might also play an important role in both risk of radicalisation and any onward decisions to actually implement acts of terrorism. Again, minus sweeping generalisations or passing the buck from one label to another, quite a few diagnostic labels with a psychiatric element to them do seem to be over-represented when it comes to autism (see here) and services are not necessarily suited to picking them up or managing them for everyone (see here). This applies particularly to those conditions characterised by an altered sense of reality (see here) - I assume, a potentially important point for some when it comes to for example, transitioning from ideas to acts.

Another issue that ties in with some factors already mentioned is the idea that "everyday young people in social transition, on the margins of society, or amidst a crisis of identity" may be over-represented among some parts of radicalised terrorism. Minus any psychobabble, it wouldn't be difficult to fit some on the autism spectrum into some of those categories on the basis for example, of being marginalised or being 'amidst a crisis of identity'. Obviously one could argue that such issues are not autism-specific; quite a few young (and old) people probably feel disenfranchised particularly in today's modern society and hence a diagnosis of autism per se is not the defining variable. But again, we come back to that issue of vulnerability...

Reiterating that any talk about a link between autism and vulnerability to radicalisation in the context of terrorism is fraught with difficulties and risks, there is a need for further scientific investigation into this area. Radicalisation is a complicated process (see here); the risk of which is not something that can be just laid at the door of labels like autism or autistic traits. One needs to be mindful not to stigmatise whole swathes of the population on the basis of a few, very high-profile cases. Yes, people want quick and easy answers to the questions of 'how and why' but I doubt there are any simple or universal answers to issues such as radicalisation and further.

The fact however, that the Allely article was published at all highlights how this issue is starting to come into the public consciousness. If indeed some of the facets of autism or the issues created by a diagnosis of autism are found to be a variable in some cases of radicalisation and beyond, resources aplenty need to be poured into what can be done to educate against and mitigate any excess risk both inside and outside the context of a diagnosis of autism or autistic traits. All this however needs to be done carefully minus further stigmatisation and any scaremongering (that includes sensationalised newspaper headlines) but always realising that science should not being afraid to try and find answers to difficult questions in as many different quarters as are required.